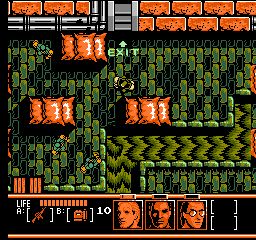 My view of Mission Impossible is incredibly skewed for some reason and I’ve never been able to tell why. The game is every bit as good as the rest of Konami’s classic NES lineup yet it seems to fly under the radar. That fact is doubly strange considering just how popular the movies starring Tom Cruise have been worldwide. It seems natural that Konami would make a game that features stealth elements considering their work with Metal Gear yet Mission Impossible doesn’t feel the slightest bit derivative. Though incredibly frustrating at times MI is a good game that worth tracking down.

The game is based on the short lived second series from the 80s and sends your team of agents on a mission to rescue Dr. O and fellow agent Shannon Reed from the clutches of an organization known as the Sinister 7. The globetrotting adventure will take your team to a variety of locales not often seen in video game at the time such as the Swiss Alps and Venice. Interestingly the game was developed in the US by Konami’s Ultra Games division yet still has the same quality we came to expect from their Japanese efforts.

Since the game shares the same overhead view and espionage theme as Metal Gear they do play similarly however it also borrows a page from TMNT’s handbook. Your team of three agents differ in their abilities and equipment and can be switched between at any time. Mad Harte is equipped with a rifle that can attack from long range and a set number of explosives. He is also wearing body armor and as a result moves the slowest. Grant Collier is the strongest and uses his fists plus sleeping gas to get out of a pinch. With no weapons he is the fastest and can also disable security locks and doors. Last but not least the Aussie Nicholas Black is a balance of the three: not the fastest but pretty quick and his boomerangs travel a medium distance. They can inflict damage on the way back and by moving around you can take out enemies behind cover. His temporary disguises will keep enemies from attacking but they aren’t as useful as you would expect.

The small distinctions between characters is incredibly important as each will be imperative for progress as some point. As previously mentioned this is a team effort as you must make use of each character’s abilities to navigate the massive levels. While there is a greater emphasis on action there is just as much stealth involved with a great many situations that will go smoother if you remain unseen. The goal of each mission generally boils down to flipping switches that open doors or shut off hazards such as conveyor belts in order to find the informant who will forge IDs for the team. These IDs are needed to access the end of the level, be it saving a hostage or facing a boss. Stages 2 and 5 are fast paced vehicle based levels that are a nice reprieve from the more methodical pace of the rest of the game.

The game’s size works against it in a few ways. Each stage is huge and there is no map provided. You have the freedom to complete the “objectives” in each level however you like but that’s because the game gives you little direction. There are NPCs who give vague clues but they aren’t very helpful. Memorizing the stage layouts will come naturally but chances are you’ll die at which point the game kicks you back to the beginning of each level. It’s a harsh punishment and one you’ll face regularly as the game is pretty brutal in its challenge.

This is not an easy game by any stretch, some of it due to challenging yet rewarding gameplay but others because of bad design decisions. Losing any member of the team is practically devastating to the point where you might want to consider restarting the mission. There are numerous areas that feature a gauntlet of enemies that borders on insanity that you’ll be lucky to escape with just one person alive. Though boss battles are few in number they are a nightmare. The stage three boss in particular takes place in a room with blocks that crumble if you stand still too long, effectively placing a time limit on the battle. It sounds cool in theory but in practice is a giant pain in the ass; what were they thinking? Unlike say Battletoads there are unlimited continues and passwords so it is at least doable I wager you might break a controller in anger, especially towards the end when shit hits the fan.

In spite of the maddening difficulty Mission Impossible is another in the long line of quality Konami titles. Though it may seem to borrow elements from Metal Gear it doesn’t matter as the game still has an identity uniquely its own. Stealth action games in 8-bit were rare so it is nice to see another that is truly excellent.