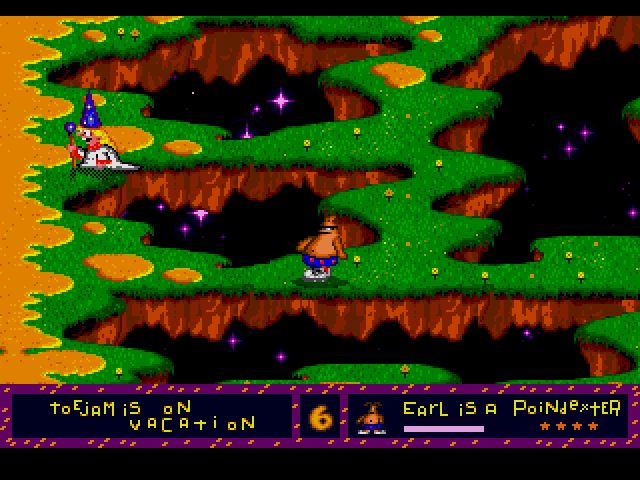 Once upon a time two funky alien dudes came to Earth and gifted Genesis owners with a cool coop game unlike few on the market. That period in 1991-92 was when Sega really began to hit their stride with unique releases and ToeJam & Earl were a part of it. The recent kickstarter for the new ToeJam & Earl has made me nostalgic for the series and I’m glad to say that the original holds up relatively well although solo gamers may find it a bit trying to see it through to its conclusion.

Our funky fresh duo are cruising through the galaxy when Earl’s terrible piloting skills see them crash land on Earth. With a wrecked ship on their hands the pair have no choice but to brave the hostile Earthlings and environmental hazards to find the pieces of their ship to return home to Funkotron.

Though it doesn’t look it TJ & E has many elements in common with Diablo and Shiren the Wanderer. You can choose a fixed world with set item locations or randomly created levels for a different experience every time. Rather than weapons and armor presents form the lifeblood of the game. Presents come in all shapes and sizes and aren’t identified until used or you pay an NPC, much like Diablo. It’s no exaggeration to say that the sheer magnitude of items present is part of what makes the game so great. Some are just food but the really fun ones allow you to fly around the levels, leave decoys to fool enemies or even reveal pieces of the current map. There are just as many bad ones such as the randomizer which is self-explanatory or Totally Bogus, which actually kills you!

As a single player game ToeJam & Earl is fun but can grow old pretty quickly. Depending on your choice of a fixed world or randomly generated your experience will vary. With a fixed world the design is far tighter. The elevators, ship parts, and presents are more thoughtfully placed to eliminate some of the meandering that would normally take place. With randomly generated levels it’s all over the place which makes the slovenly pace of the game that much worse. Both characters bop along too slow for my liking and I guarantee you’ll use any movement related items as soon as possible just to get around faster. Sometimes you’ll have six floors that contain no parts forcing you to explore the map just to find the next exit; other times you’ll get lucky and get multiple parts in a row. I suppose that is part and parcel of such a feature but it works against the game somewhat.

It is fitting then that the game truly shines in multiplayer, so much so that I would say it was designed for it. Coop is done in a really cool way that I wish more titles copied: when both characters are together you share one screen but when separated it splits. With two-players you can both split up and cover more ground which alleviates the slow pace considerably. Granted you’re both still performing the same slow actions but when you have half as much ground to cover it does wonders for your enjoyment of the game. There’s a ton of incidental dialogue exclusive to coop as well as features such as sharing health and such. The game is so much better with a friend that I wouldn’t recommend it otherwise.

Despite the laid back atmosphere the game can be unfairly hard at times. Never mind the randomness of presents some of the enemies are particularly vicious and most encounters with them will result in death. Pray you don’t run into the bogeyman or honeybees on a straight path as they will aggressively pursue you for a long time. Presents and ranking help but not by much. There are no continues or passwords so the game has to be done in one sitting which can vary depending on a number of factors. It’s still disheartening to find eight ship parts only to step off an elevator surrounded by four enemies.

Visually this is a bit average. The game is at its best when it is throwing a litany of absurd characters in your path such as the bogeyman, the mad dentist, and even little devils. I love that the designers basically said screw logic and threw in anything they thought was cool and funny regardless of whether it makes sense or not. But when left alone to explore each world it is hard not to notice how little variety there is in the tile sets they are composed of. Each successive floor is merely reshuffling assets and isn’t too creative about it.

The real star of the presentation is the soundtrack. The entire game has a hip hop vibe to it and the soundtrack expounds on that perfectly. Of course that should be expected as the two aliens are essentially rappers. Part hip hop crossed with funk the beats produced with the FM synth are fantastic, so much so that even the enemies seem to be grooving out to it. There’s even a jam out mode that lets you accompany each of the game’s songs with sound effects. They were definitely proud of the sound design in the game and they should be since it is so awesome.

Overall ToeJam & Earl has held up surprisingly well after all these decades. Many of its elements have become more commonplace over the years but the execution here is still good enough to make the game fun. The random level generator gives the game infinite replay value but this is still a title that I would only recommend if you plan to play with a friend.