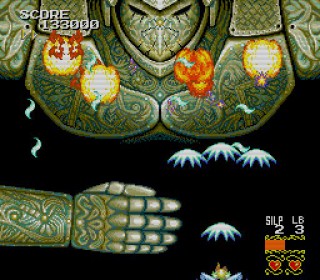 And now something different from the shmup masters at Compile. With the exception of the Aleste series nearly all of Compile’s shooter output were of the space variety. As much as I like a good space shooter they don’t offer as much diversity as you would expect. With its fantasy theme Sylphia is like Phelios’ prettier big sister. With its intense action, high production values and excellent pace this is one of the best shooters for the system. Too bad you’ll have a hard time finding it.

An Ancient City in Greece is invaded by demons who slaughter its inhabitants. One of these citizens is a warrior maiden struck down protecting the innocent. The gods reward her bravery by transforming her into a fairy with vast mystical powers, powers that will now be used for revenge. As a late 1993 release Sylphia was one of the last PC Engine CD games released in Japan. The game is much more reserved in its use of the CD when compared to a game like Renny Blaster which was released around the same time. The only cutscenes are the intro and ending and aside from the music this could have been a Hucard title. That isn’t a knock against the game as the lucky few with enough money to buy it will be well rewarded.

Sylphia makes excellent use of its fantasy setting, more so than any other shooter with the same theme. The areas you visit look and feel unique and as an added bonus you’ll face a different set of enemies on every level. That much variety is absolutely staggering and unheard of plus keeps the game feeling fresh for the length of the quest. The creature designs are both familiar and original; they really dug deep into Greek myth to come up with such a diverse list of monsters. I made the comparison to Phelios earlier but that game has nothing on this. Some of the enemies wouldn’t look out of place in some of Atlus’s RPGs; the skeleton gladiator riding a chariot driven by flying manticores is a particular favorite of mine and resembles one of the 8 fiends in Shin Megami Tensei Nocturne. That’s a compliment by the way.

Like other Compile shooters the game makes use of color coded weapons that correspond to the elements. The Red fire travels and Blue reverse fire possess some homing capability although it is hard to determine which is stronger. The green ring blades are pretty devastating as they linger in one spot and cover a wide arc but are a little weak. That leaves the earth rocks which are terrible. The boulders produced distract from enemy bullets and obstacles and only drop straight downward. Supplementing this is a giga attack that has limited uses but an experience bar that can be increased by collecting mirrors and gems will award more. As much as I like the weapons I wouldn’t have minded a few more since one of them is essentially useless.

I found the difficulty about perfect for both novices and diehard shooter fans. The game’s pace varies between bouts of all out chaos and slower moments that allow you to catch your breath before the mayhem starts again. With different enemies on every level the game provides plenty of reasons to switch weapons rather than sticking with a favorite. While one hit deaths would have made the game more intense providing a life bar was a smart choice as the game would have been impossible otherwise. In an odd twist I found the bosses to be absolute pushovers compared to the journey just to reach them which is strange as it is usually the other way around. The difficulty means it will probably take a few hours to beat the game despite unlimited continues which is pretty good value for a shooter.

Visually Sylphia is spectacular and just shy of being one of the best showcases of the hardware. There’s a generous smattering of scrolling backgrounds that are simply beautiful. On the other hand there are an equal number of flat and drab backdrops that are just ugly in comparison due to some hideous color choices. The fantasy theme is heavily Greek inspired, from both its scenery to most of its bosses. The bosses are the games’ true visual highlight. You’ll recognize Medusa, Cerberus, the Minotaur and the Titans but you’ve certainly never seen them like this. Medusa in particular is pretty stacked. Actually there’s a surprising amount of bare breasts although it isn’t salacious.

I was pretty surprised to hear a heavily techno influenced soundtrack rather than symphonic score. The music is excellent, heavy on the drum and bass yet still melodic. My only wish is that the music were louder as it tends to get drowned out by the punchy sound effects.

I approached Sylphia with no expectations and was absolutely surprised. This has quickly become one of my favorite shooters of all time alongside Harmful Park and Gradius Gaiden. The only problem is its price; since this was one of the last PC Engine games released in Japan not too many copies were printed making it rare. If you see it at a decent price buy that shit, you will not regret it.