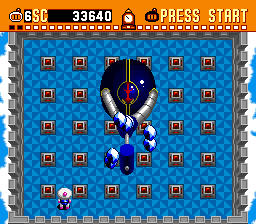 I was not fond of Bomberman on the NES. My initial interest in the game mostly came from the fact that the title sounded like the name of a Mega Man boss. So I went into it expecting a fast paced action game and was instead greeted by a plodding maze game. And while that sounds damning the core theme behind it was at least brilliant. When the series entered 16-bit it truly came into its own with the addition of multiplayer that is still popular today. While Super Bomberman’s four-way multiplayer is still great the story mode is also pretty damn good as well making this one great package.

The slow pace of the NES titles is a thing of the past as the game is faster; well at least as fast as a game of this type can be. The central conceit of using your bombs to clear walls and blow up your enemies remains except now there are a ton of power-ups that spice up the action. Kicking bombs, tossing them, dropping multiple bombs at once, it all feeds into the need to be the last man standing in the end. Some of these items were in the seminal Bomberman ’93 but that does not diminish their presence here.

The level design has been stepped up considerably to go along with the presence of new items. Each of the 6 worlds is loosely themed, from the simplicity of Peace Town to the more complex Robot Remodeling Factory. Enemy placement as well as hard blocks is always random however the types of enemies and other factors such as warp blocks or trampolines is not. Despite the game’s random nature there is still plenty of opportunity to strategically place bombs to cause chain reactions and clear the field in seconds. There’s lots of subtle technique you’ll pick up on, such as standing slightly off center to force enemies into the path of your bombs. There’s enough here that the repetition will not get to you too much.

The campaign features a pretty steep difficulty curve that I don’t think most will expect. The game does a good job of slowly building up to the more aggressive enemies initially but by the middle of world 2 there is little room for error. Because of this some of the better designed stages will devolve into spamming a ton of bombs while you are invincible at the start to thin the ranks. Good strategy but it leaves little room for nuance since the later levels pack so many enemies into a small space. Time is not on your side, especially if you happen to uncover the exit. After a set period the exit will begin spawning new enemies that must be cleared before you can leave. It is not easy to end the cycle once it has begun and chances are you will die repeatedly. While the challenge is high it is still manageable, just incredibly frustrating at times.

I go back and forth on whether the single player mode is a bit too long. Each world features 7 levels and a boss however the game does a good job of varying things up quite a bit on that journey. New enemies are introduced regularly and in interesting combinations. Alongside the creative layout of each map in terms of obstacles and traps it will take a while for boredom to set in. 7 levels in the same environment is a bit much in my opinion; if it were four or five with a boss battle at the end it would have been perfect. World five is the sole exception; here you face a gauntlet of rival Bombermen in a mock multiplayer match, with each becoming progressively more intelligent. I love it and would have liked to have seen more original ideas like this throughout for a change of pace.

As good as the single player is however multiplayer is the true star and the game comes loaded for bear. The twelve multiplayer maps are all unique and expertly designed with a few stage themes exclusive to this mode. My personal favorite is the Light Zone which is completely dark and features two moving spotlights, providing plenty of chances to ambush your friends. The speed zone eschews traps and ups the game speed instead, may the best man win. Although you can play against 3 computer opponents nothing can replace the unpredictability of facing off against friends as the AI isn’t too bright. Considering the number of times I rented the game purely for multiplayer I probably should have just bought it which should tell you how much fun it is.

Super Bomberman was a great game back in the day and is still excellent even now. While later incarnations of the series eclipse this in terms of features that doesn’t diminish the amount of fun that can still be had with it today.