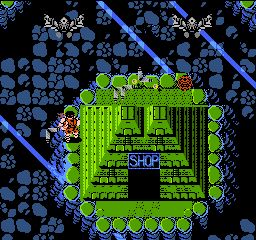 You know I really hate this game.  Mind you I never thought highly of the first game either but I know stink when I smell it. And this game stinks.  Back in the day when getting new games was not exactly a weekly occurrence we wound up with this piece of crap.  By that point stores like Sears or Toys R Us no longer allowed trade- ins so we were stuck with it.  So we played it and hated every single moment of it.  Never let it be said that I did not give it a fair chance.

Ikari Warriors II was released in arcades in 1986 with a NES port following in 1989.  This was another in the line of NES sequels that differed from their predecessor, although in this case it’s due to the arcade original.  Our heroes Ralf & Clark after having fought some battle that’s never mentioned are flying home in a borrowed jet when a freak thunderstorm transports them to an alien world.  I’m not making that up.  There they are commissioned by the ruler of the land of Alexia to free his world from the evil Zang Zip.  I’m not making this up.  With guns a blazing the adventure begins.

Like the original you play from a overhead view.  You now have the ability to lock your fire while moving around independently, for all the good it does (more on that later).  There are 4 primary weapons that can be upgraded in addition to the machine gun and grenades you start with.  Most of these are generally worthless however.  The bazooka is powerful and can hurt enemies normally only vulnerable to grenades but suffers from short range which is a detriment in this game.  The sword is worthless and should not have been included;  it only comes in handy during the final boss fight where it is forced on you.  The boomerang is your best friend, able to be thrown multiple times at varying angles and can blanket the screen.  Your grenades can destroy blocks to reveal weapons and other items plus damage certain enemies invulnerable to your other armaments.

The hearts dropped by enemies function as currency for the shops to buy upgrades.  You have the option to fight 1 of 3 monsters in the shop for more but the hassle isn’t worth the trouble.  You only get 1 life, no passwords and no continues without a code.  God I don’t miss stupid bullshit like that.  It seems like a solid update of the first Ikari Warriors but the problems pile up immediately at the start.

The issues with this game are numerous, the primary one being the controls.  The arcade cabinet used an eight way joystick which in conjunction with the fire button allowed you to move in one direction and lock your fire in another.  The home version tries to emulate this with disastrous results.  Cycling through all 8 directions with a d-pad is painfully slow and you’ll never quite land in the proper position you wanted.  The enemies move at a lightning pace with most firing projectiles of some kind.  You’ll be hard pressed to dodge these when they come at you from all sides in massive numbers.  The optional boss fights you can get sucked into by the mirrors that appear are generally never worth it for the frustration you’ll face.  The same can be said for the monsters you can fight for hearts in the shops.  Losing means you lose all of your hearts, winning nets a paltry amount in return.

The end level bosses in a strange twist are pushovers with most never being able to reach you if you’re careful.  That is except the final boss.  You are forced to fight using nothing but the stupid sword and grenades and infamously the infinite continue code stops working here after a few tries, leaving this fight near impossible.  I would try again and again to beat the game with my friends in coop to no avail, wanting nothing more than to have some sense of closure with the game.

What a handful.  It would have been easy to rip into the game and trust me I wanted to but I’d rather give context for my complaints.  Don’t play this game.  If you see it use it to hold up a broken desk.  That’s about all its good for.