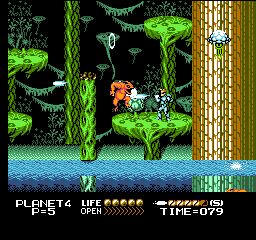 When I look back, many of the NES instruction manuals had retarded localizations.  The cause of much confusion and speculation because of the way it was marketed/presented, Street Fighter 2010 is a completely separate product from the revered series it shares a name with and is a pretty decent action game when judged on its own merits.

Street Fighter 2010 was released in the fall of 1990.  Set in the year 2010 (of course!), Ken is a retired martial artist turned scientist who has invented a new alloy named Cyboplasm.  When the Cyboplasm is stolen and his partner Troy is killed Ken decides to enhance himself with bionic implants to bring his killer to justice.  This is a wild departure from the Japanese version, which casts you as a cyborg policeman on an intergalactic hunt for criminals.

Some overly enthusiastic marketing exec probably thought it would be cool to tie it into to Street Fighter, and in the process created a shit storm that would last for decades.  This is not the same Ken that Sho Ryu Ken’d asses across the globe.  With that out of the way, is the game as bad as some make it out to be though?

Primarily a platformer, progress largely revolves around collecting the energy necessary to travel between worlds.  Every level has a designated boss or enemy that provides it, presented in fighting game fashion.  Ken is as nimble as the best of the platform genre, able to climb walls, poles, hang from nearly any surface and back flip with the best of them.  His primary weapon is a projectile attack that can be fired in nearly all directions with the strength varying depending on the attack.  Powerups are few, with the only two being an option to damage enemies with your back flip and a power capsule that increases the range and strength of your attack.

The greatest strength of Street Fighter 2010 is the diversity among the levels.   Although there are a decent number of traditional platform stages many take place in a single arena or setting, leaving you to duel with your rival for that particular stage.  One moment you’ll fight in an alien bar and the next sliding down a waterfall made of lava.  Assorted scenarios like these are in abundance, and the game can never be accused of falling into a routine.  The enemies you face can be repetitive at times but for the most part there is a diverse selection of bosses to face; you’ll always look forward to traveling to a new planet.

The only thing that brings down the experience is the loose controls and the challenge.  Because certain attacks are executed with very precise motions it can be easy to pull off a different move altogether.  Your attack range is often at odds with enemy placement and will frustratingly lead you to climbing all over the environment to find a position to hit them from.  Because you can climb almost all surfaces in many ways it can lead to unfair deaths in the forced scrolling segments where speed is paramount.  Power ups to extend your attack range aren’t in great supply all the time so if you suffer too many hits and your weapon is downgraded it’s nearly impossible to kill some of the harder bosses.

This is not a short game so the lack of batter back-up or passwords just adds to the irritation.  I don’t think it’s a stretch to say not too many people have actually completed this game; hell it took me years of trying on and off to reach that point.

Ignore whatever nonsense connection to Street Fighter someone at Capcom tried to cook up.  This is definitely a good platformer that is worth your time and is only brought down a notch or two by the finicky controls.  Otherwise Street Fighter 2010 does the Capcom name proud by being a competent and original action game for the platform.