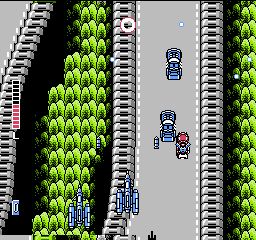 Spy Hunter is remembered as an NES classic but if you go back and actually play it you’ll wonder why. The game is really simple, has no end, and is far more frustrating to play than it should be considering it doesn’t have the most complex mechanics. But it did have a really cool musical theme, for what it’s worth. Super Spy Hunter makes good on that game’s promise and is excellent. Somehow despite its predecessor’s popularity it has maintained a low profile but don’t let that deter you as this is another notch in Sunsoft’s belt.

What’s actually surprising about Super Spy Hunter is that it is actually a different game altogether. Originally released in Japan as Battle Formula Sunsoft’s American division rebranded the game and with good reason; it plays identically to Spy Hunter although that game was created by Midway. The game’s silly premise sets the game 500 years later in the year 2525. You wouldn’t know it course as the only thing that has changed are slightly fancier cars. An international crime syndicate known as “X” plans to launch an attack on the United Nations and it is up to you and your tricked out car to stop them. I swear this could be the plot of a Fast and Furious movie but that is actually a compliment as those movies fully embrace their stupidity and are awesome.

Spy Hunter was a fast paced game and the same applies here except now you given the necessary tools to keep up with the game’s pace. There are a decent variety of weapons available and thankfully rather than having to line up with a stupid truck you simply smash it to earn the highlighted weapon. There are shot upgrades, missiles, the popular oil slick but most importantly cannon control, which automatically targets enemies. It’s rough going initially since your life bar is small but it doesn’t take long to power-up at which point with some skill you can cruise through the levels.

The level design is excellent and incredibly varied. For the most part you control the game’s pace and can go as fast or slow as you wish. With no time limit to worry about the game provides plenty of reason to adjust speed when necessary and does a much better job of telegraphing incoming hazards. The road is no longer a straight path but curves and undulates. There is far more varied terrain as well; the game does not take place strictly on the highway as you’ll drive through quicksand, pilot a motorboat and even take to the skies in a helicopter. Some of these elements were present in the original but it was so badly designed most would be hard pressed to ever see them. This is a much tighter experience that really fulfills the promise its premise suggests.

My one gripe is that the levels run a bit too long and would have been better served broken up into two segments each. Any of the alternate vehicle segments could have stages by themselves rather than sandwiched in as a smaller part of a larger whole. The level breaks that could have created would have helped with the difficulty as the six levels here feel like an all or nothing proposition. The boss battles are really cool but are also as long as the stages themselves if you can believe it. Each goes through multiple phases that are difficult but feel rewarding once completed.

While the pace has been slowed down somewhat and you are empowered to deal with the numerous threats in your path the game is still brutally difficult. The slightest touch will inflict damage and starting out your life bar is woefully short. If you die you are brought back down to the standard life meter and depending on the checkpoint it might be near impossible to mount a comeback. This is particularly a problem during the long drawn out boss battles, to the point where you might as well start the level over. Power-up trucks appear regularly but it’s entirely possible to miss out on the item you need really easily, namely life.

Like nearly every NES game they crafted Super Spy Hunter looks great. Although it doesn’t look like it this is a pretty technically advanced game with extensive use of raster effects seen mostly in 16-bit games. The road twists and turns realistically and there are even highway overpasses and bridges. It’s minor but adds to the game’s atmosphere and sense of speed. The screen can get pretty crowded at times with only a minor bit of slowdown. Flickering sprites are a bigger problem as the developers were a bit too ambitious for the hardware. The soundtrack is also great; that familiar Peter Gunn theme returns but is also joined by wide range of tunes that almost sound like they belong in a Konami game.

Though slightly flawed Super Spy Hunter is not only makes up for the lackluster original but is an excellent game in its own right. Brutally difficult but highly enjoyable the game is hard to find but so worth tracking down.