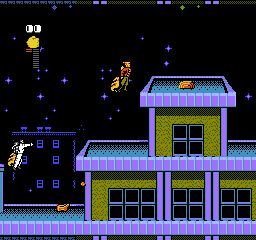 I remember the insane marketing blitz surrounding the Rocketeer. From toys, fast food tie-ins, to commercials Disney went all out in a bid to convince you that this was the next big thing. I specifically remember the art deco movie poster and thinking this guy looked incredibly cool. Mind you I was 11 and didn’t know a thing about art deco but didn’t need to; that poster just grabbed you. In the end it was all for naught as the movie failed at the box office but we did get a few games out of it. This NES tie-in follows the film’s plot faithfully but aside from that there is little that helps the game stand out. It’s a decent game overall but is lost in the sea of platformers already available.

The film’s iconic rocket pack is present in the game but disappointingly it isn’t as crucial a game mechanic as you would expect. There are only a few sections where it is necessary for progress and they never progress beyond flying over a wall or hitting a boss’s weak point. In fact a good portion of the time you can’t use it as the game won’t provide any fuel! Technically you can use it to fly over a sizable chunk of the levels but the designers were aware of this and either sandwich you in tight areas or have flying enemies that are tough to kill and only appear when you fly too high.

Without flight you are left with a pretty generic platformer. You have a decent assortment of weapon that all use varying amounts of ammo. The game does a good job of providing ammo but it can run out fast so you’ll more than likely stick to the standard pistol or your fists. I wish I could say that there were interesting enemies to test them out on but in reality the game only has about 5 or 6 different enemies. Get used to killing the grey suited idiots that run straight for you and Mr. Tommygun a lot.

The game’s five chapters feel a lot like ten since they run so long. It could be the game’s slow pace but each individual chapter is broken up into multiple segments that each seem far too big for such little content. The level design is as straightforward as it gets. Despite having a rocket strapped to your back there is little reason to use it at all since “secrets” (if you can even call them that) are very few. Between the repetitive enemies and the bland scenery it makes trudging through the long stages a chore. It’s disappointing because you can see the shell of what could have been a great game but the stiff controls and dull levels ruin it.

The drab set design is especially egregious for me as I love period piece movies and the game could have capitalized on that. The graphics have their moments but are ruined by the garish color scheme. The movie was a period piece and when the game is reenacting certain moments it is very stylized and looks unique. Anything outside of that is gaudy. The Rocketeer himself makes for such a cool visual that I’m baffled that the developers could not surround him with equally pleasing aesthetics.

There’s a pretty sharp spike in difficulty in the game’s final chapter that isn’t present in the rest of the game. Generally the game does a good job of providing ammo so you don’t have to rely on your fists but the forest level is just so badly designed overall that it’s better to fly through as much of it as possible rather than trying to slog it out slowly. There’s really bad enemy placement, a confusing layout and it drags on far too long with no checkpoints. I won’t say its Ninja Gaiden stage 6-2 levels of bad but it’s really close and will almost kill your motivation to finish the game.

The Rocketeer is one of Bandai’s better NES games but that isn’t saying much considering they released crap like Dragon Power, Gilligan’s Island, and Chubby Cherub. This is a decent platformer but there are far too many better alternatives to bother.