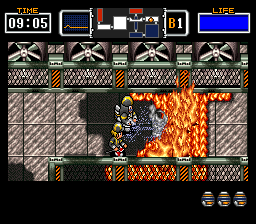 Years before Sega would bless the world with Burning Rangers and Brave Firefighters the SNES was gifted with a pair of really awesome games about firefighting. The Ignition Factor is heavily underrated and worth tracking down but the true gem is Human Entertainment’s the Firemen. With its almost action RPG structure the Firemen is better than most dedicated top down shooters, While the US narrowly missed out the game was released everywhere else meaning if you are even the slightest bit interested in the game buy it now!

A large fire breaks out during a Christmas party at the company Microtech. Normally this wouldn’t be a huge deal but a number of highly explosive chemicals located in the building’s basement threaten to turn the situation into an even bigger disaster than normal. Fireman Pete and his team are called in to rescue civilians and get the blaze under control before things become critical.

That eerily sounds like the premise of Die Hard if you switch out terrorists with chemical fires. You even have a navigator and team members who communicate over radio. The game stays realistic although it does start to get a bit ridiculous when you have living flames that follow you around and actually fight bosses such as an out of control repair bot and various fire creatures. One could make the argument that things are different since the game takes place in 2010 and the game was made in 1994 but it does strain your suspension of disbelief. It can be easily ignored however as the rest of the package is so well done.

Honestly I am surprised at just how amazing a game that is simply about putting out fires really is. Running around with a hose and dousing flames sounds like it would get repetitive fast but the game is endowed with smart level design and a good set of mechanics that stave off boredom. You have two separate water bursts; a long range but weak spout and a more powerful short blast to handle the smaller flames on the ground. To avoid backdrafts, sudden explosions and flying enemies (!) you can crawl. Fire extinguishing bombs are in limited supply and better saved for boss battles.

Luckily you aren’t putting out these fires alone. Danny is your second in command/sidekick and is by your side for the length of the game, activating switches, doors and the like. But he is more than just a glorified butler as he will also douse flames too. Unlike most games that have AI controlled party members Danny is actually indispensable here; I would even say he is the best use of such from that era. With his axe Danny will beat down any flames that stray too close and isn’t afraid to venture off a bit and be proactive. He’ll also back you up when you go on the offensive. Since he is invincible you can use that avoid sticky situations when low on health. It really is incredible how well programmed Danny is; modern 3d games that saddle you with a useless partner take note.

Even though the game is confined to the single high rise there is a large degree of variety and creativity at play at every turn. Flames come in numerous forms, with some leaving a trail in their wake and others flaring back up if you fail to douse them long enough. Walls of fire need to be ducked and even exploding barrels make an appearance! The variety in flames require you to use both of your hose shots and it isn’t long before you’ll have to switch between the two in rapid succession. Each floor has a time limit that leaves just enough time to explore, whether it is to extinguish every flame (which isn’t necessary) or to save civilians, which is the only way to restore health.

The difficulty curve is about perfect in my opinion. Each successive floor introduces new hazards you’ll have to deal with and a much stricter time limit. Later in the game you’ll have to be careful not to break every window or open ever door as you never know when a backdraft will occur, leaving you with seconds to react. There is usually only one person to rescue per level which means you can’t afford to be sloppy, especially as continues are limited.

Honestly the only thing missing that would have made the game near perfect is 2-player coop. The mechanics work so well and even though Danny works better than expected nothing beats running through the game with a live human. Not that the game is too short but it also would have extended the game’s life. Overall I suspect most will complete the game in a few hours which seems about the right length although I would have loved extras like being able to play as Danny with Pete as your back up. God that would have been so cool.

The Firemen is a truly unique game even to this day and one well worth tracking down. If you want to enjoy the game’s story (such as it is) this was released in Europe and isn’t too expensive. With excellent graphics and a very good soundtrack the Firemen is one of the best top down action games of the 16-bit era.