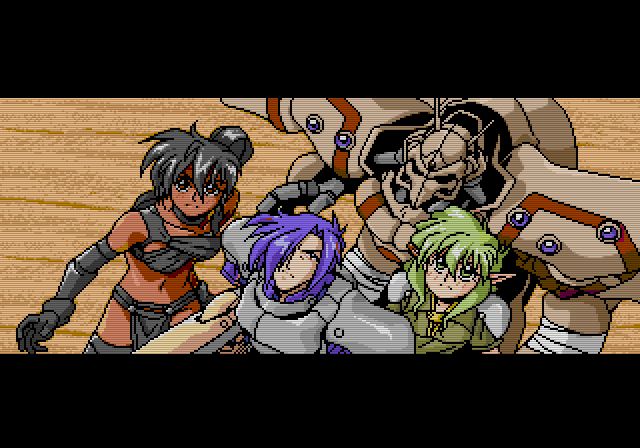 Top down shooters were pretty rough affairs on the Turbo Grafx. Final Zone 2 is just a bad game overall, Last Alert is decent but has some of the worst voice acting in history and as much as I want to like Kiki Kaikai Pocky & Rocky simply outclasses it. Mystic Formula is one of the rarer titles for the system and while certainly better than the previously mentioned games it feels like the developers were more interested in telling a fun story through cutscenes than making a good game. The levels feel more like necessary busywork to get to the next cinema. Even in spite of that the game is decent but not worth its hefty asking price.

With its fantasy setting and similar overhead view Mystic Formula resembles Elemental Master but has more in common with Capcom’s Mercs. All four heroes differ in terms of their range, strength and means of attack. In the end however they are all viable since the game is so easy, meaning it comes down to who you think looks cool. The game makes use of a charging mechanic that determines the power of your shots. Spamming the attack button will produce weaker bullets that only travel a short distance while letting the meter charge fully creates a bigger long distance projectile. Since the meter charges automatically and quickly at that you will most likely rely solely on the larger blasts. Power-ups aren’t too common and are few, with the most useful summoning one of your allies to fight beside you until death.

It’s pretty obvious where the bulk of the game’s budget went and it wasn’t in the gameplay. The game’s frequent cutscenes are long but not fully animated. Despite that I will say that the game’s cast of characters are a likable bunch and exuberate a ton of personality that is easy to discern despite the language barrier. The in-game graphics however are lackluster. The first level is pretty interesting with its cool armored midboss and dual end level gargoyles. But from there it drops off considerably. The following levels look like they were cobbled together from one repetitive tile set which is incredibly lame.   The soundtrack on the other hand is fantastic. Micro Cabin has a long history of excellent music in their titles and MF is no exception. The hard rock tracks suit the game well although I wish they were longer as they tend to stop and repeat quickly.

Average graphics aside the pacing in Mystic Formula is the only thing keeping it from being truly great. There are long gaps in between enemy attacks and when they do occur most of the time they are so slow there is very little excitement. The last two levels do ratchet up the intensity somewhat and if the game had that same enthusiasm throughout the length of the quest this would have been excellent. Not that every game needs to be a nonstop thrill ride like Smash TV but the game can seem a bit too laid back. My dudes are armed with exotic weapons, give me a reason to use them!

With sparse enemy waves and overpowered weapons the games falls on the easy side. Part of this of course comes down to your choice of character; Raiden is simply too well rounded. The other characters vary things up a bit but you will never feel any pressure since you are fighting little bats and such instead of aggressive soldiers. About midway through the game when the real villain makes his appearance the game steps it up a bit as you’ll fight larger mecha but they come in prearranged groups and still fall in a single shot. Even the bosses are pushovers in spite of their menacing looks. I finished the game without continuing and I’m sure most will be able to accomplish the same with no trouble. Aside from playing around with the other characters there isn’t any reason to run through the game a second time as the experience is ok at best.

Adequate about sums it up. Mystic Formula nails the fundamentals but does little to surround them with an exciting game that has you itching to pick up the controller. I really wanted to like the game more as the cast are a fun bunch and the bosses are extremely cool but it simply isn’t enough. The game is pretty pricey unfortunately and is simply not worth the prices it commands. As a $10 downloadable title maybe and that’s the best praise I can give it.