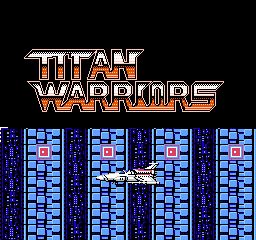 Overall there is no question that Capcom was one of the top NES publishers in the US, with a library that spans nearly all genres. However looking back there shooter output for the system was a bit mediocre. 1942 was a typical Micronics hack job and an embarrassment; TaleSpin could have been decent if not for some bad design decisions and Legendary Wings is only slightly above average. 1943 is the only one of these games that is great. Capcom’s 1988 sales brochure at CES that year made mention of a game called Titan Warriors, a sequel to their very first game Vulgus. While it looked cool TW was ultimately cancelled although it was more or less complete. Thanks to the magic of the internet however a complete prototype is available and aside from some bugs the game is excellent. We missed out on a great game.

Those that like a robust set of weapons in their shooters will be disappointed that there are only two options available. The laser is the standard single shot weapon, thin but extremely powerful. The Reflect laser can bounce of surfaces but is weak. Each can be powered up multiple times although in the case of the laser the difference isn’t as pronounced. In lieu of options your first weapon upgrade will attach armor to your ship that doesn’t protect you from hits but instead can be detached from both sides and provide additional fire for a few seconds. At full power this will give you a temporary shield for a brief period although it isn’t too common.

I’ll admit to some disappointment that the weapon selection is so small but in terms of functionality you don’t need more. The levels are so well designed there are plenty of reasons to use both. Each of the game’s six stages is split between a land zone and a space zone, making this one of the longer shooters of the time. The land zones tend to be full of wide open spaces that allow more maneuverability allowing the laser to shine. Out in space there tends to be more confined spaces making the reflecting shot invaluable. Despite this however more choices would not have hurt the game at all.

Owing to its status as a prototype (albeit feature complete) there are some notable bugs and such. Disappearing enemies tend to crop up here and there but the most noteworthy would be the wonky hit detection. Direct hits do not register frequently and if they do the appropriate sound effect is missing. This tends to occur with the reflecting shot the most and on some bosses I couldn’t tell if I was hitting the right target or not. Still however the game is completely playable despite these annoyances.

The difficulty is moderate overall in contrast to many shooters of the time. The enemy groups come in arranged patterns and outside of turrets in enclosed areas you’ll have little trouble avoiding being hit. Most of your deaths will come from off screen shots due to the wide playing field; it is a little cheap doesn’t occur too often. There are no checkpoints so dying sends you back to beginning of the level which in true shooter fashion is brutal. Mounting a comeback from that can be tough, especially against the quicker bosses but isn’t insurmountable. For those that want a true challenge finishing the game will activate a second loop that is brutal.

For a 1988 release Titan Warriors would have been an exceptionally good looking game. The game has a bio mechanical theme going on that resembles an 8-bit version of Truxton. It isn’t as bullet heavy as that game but does get busy at times which causes slowdown. The space levels are a bit dull for obvious reasons but anytime you are planet side the world’s boast an extravagant level of detail. The bosses in particular are a pretty cool looking bunch that really pushed the envelope for that year. I shouldn’t be so surprised considering 87-88 are when developers were really on fire yet Titan Warriors is still pretty impressive all things considered.

The same lavish attention given to the graphics has also been applied to sound. The music is overall excellent, full of catchy tunes that might remind you of Bionic Commando and Mega Man. Chances are some of the same composers worked on all three titles so the similarities would make sense. A vast amount of the game’s sound effects have also been lifted from both Mega Man and Legendary Wings but that so much a complaint as an observation.

I wonder why the game was cancelled seeing as it is comes across as a top flight production for the time. Had Titan Warriors been released in 1988 it would easily have been one of the best shooters for the system. Lord knows it would have wiped the bad memories of 1942 from my mind. The rom is freely available on the web; fans of excellent games in general should check it out.