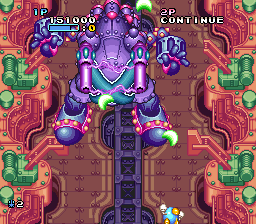 The Twinbee style of shooters never really appealed to me, although I must admit that my disdain comes from playing Stinger on the NES. After spending the better part of two hours going to and from the department store to buy a new game only to be greeted by…..that I’m pretty sure soured me on the series’ mechanics. Turns out all I needed was to play the right games. Detana Twinbee really changed my opinion and this excellent gem made me a fan. Pop’n Twinbee is a truly excellent game and one of the SNES’s finest, which makes it that much more frustrating that it was only released in Japan and Europe.

Pop’n Twinbee loses the side scrolling stages and completely focuses on its vertical action and in my opinion is a much better game for it. Juggling the bells for power-ups, one of the main tenets of the series, is now much easier. At times I was able to juggle up to eight bells at once with no trouble, not that I recommend it. The bombs have also been improved for the better. Now the bombs will automatically target the closest enemy but aren’t completely perfect and will sometimes miss. There’s also a nice tradeoff in that you need to cease using your main weapon to use them.

A few changes were made to the power-up system that bring it closer to Gradius while still keeping the flavor of Twinbee. Your options hew closer to Gradius and you can pick up a trio to supplement your fire. You also have three choices as to how they function depending on the character. Sadly you’re only other weapon upgrades are a more powerful single shot and a three-way shot although they are both pretty effective. Aside from bombs you can also wind up a punch to smack enemies in close range and even bullets if you can get the timing right.

Since this is an SNES exclusive it was designed around the system’s strengths and as such this is a slower paced shooter than most are probably used to. The game’s leisurely pace should not be taken lightly however as it is just as intense as the twitch action games popular in the genre. The game cleverly mixes in ground based targets among its more straightforward enemies, forcing you to prioritize since you can’t target both at once. While I do feel the game could have used a few more primary weapons aside from the two available the few on offer are more than adequate to complete the game.

Although the game is only 7 levels long it will still take most about 2 hours or so to complete as each stage is pretty long with some stretching up to 15 minutes. You’ll never get bored however as the visual design of the world will keep you interested as well as the pacing of the game’s action. The boss battles are the game’s true highlight as each goes through multiple phases like a raid boss. Just be grateful they aren’t as difficult.

Speaking of difficulty overall the game is balanced pretty well. On the default setting the challenge is about medium. For the most part the game is fairly easy with the occasional spike here and there. Towards the end it picks up considerably like it should and for those that want a real challenge crank the setting up to 8 and cry. Part of what makes Pop’n Twinbee so accessible would be its use of a life bar instead of lives. Although you have a single life and limited continues health can be replenished regularly, plus you can tank an absurd number of hits before death. Power-up clouds almost always arrive in clusters so unless you are absolutely terrible at the game you can maintain a set of options and a shield at all times. Yet somehow in spite of all this the game still manages to put up a fight. Like I said, perfect balance.

The visual evolution the series underwent with the release of Detana Twinbee continued here as the game looks like an anime come to life. Pop’n Twinbee looks absolutely fantastic, full of bright, vivid colors, and a level of detail in its world that wouldn’t look out of place in the arcade. The backgrounds depict a beautifully stylized steampunk world full of industrial machinery and giant sized mechs. The closest comparison would be Atlus’s PS2 gem Skygunner. The game is light on special effects with transparency used pretty frequently yet the game does not suffer in the slightest because of it. In many ways I wish more developers would show this level of restraint. All of this visual splendor is done with only the barest minimum of slowdown, a miraculous feat.

I fully expected the soundtrack to be full of bright and chirpy music that would grate on my ears after one session but instead was greeted by a symphonic score that is just excellent. The music is appropriately happy and adventurous when setting out but can also become dark and menacing at a moment’s notice.

It’s a bit curious that the best shooters for the SNES never came to the US. With the likes of the Parodius games and Twin Bee maybe the system wouldn’t have such a bad reputation (although partially true) when it came to the genre. Pop’n Twinbee is Konami firing on all cylinders and a game you absolutely need to play.