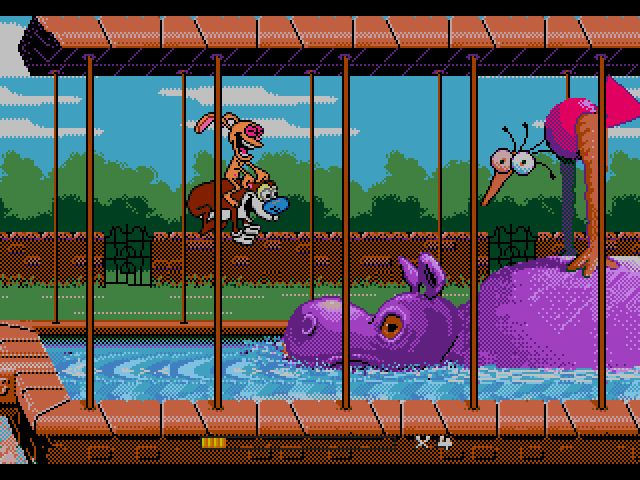 I’ll admit that I wasn’t the biggest fan of Ren & Stimpy back in the day. That type of weird gross out humor just wasn’t my cup of tea. But I could recognize a brilliant show despite my lack of interest and Ren & Stimpy was great for what it was. So it came as no surprise when the licensed videogames began lining shelves with no less than five or six games released in a 2 year span. Stimpy’s Invention however is the best of the lot, staying true to the show while also using the dynamic between the two characters to create an awesome platformer irrespective of its license.

The title of the game comes from one of the most popular episodes of the show. In Stimpy’s Invention the titular cat decides that he is tired of being a moron and somehow constructs a machine that will supposedly make you happy all the time. It was a trippy episode (those faces!) but it worked and also saved the show from cancellation. The game follows the same premise except the invention is destroyed, leaving you to collect its scattered pieces.

More than anything else the game captures the look of the show as well as the Genesis will permit. This is an exceptionally pretty game with deep scrolling backgrounds full of activity. There is some dithering going on as the game is really stretching the system’s color palette but that is a minor fault. The true stars of the presentation are both Ren and Stimpy themselves. Their range of animations is staggering and gets across the odd camaraderie the characters share with one another quite well. The only soft spot would be the music, which is simply unremarkable. It stands out even more considering how stellar the rest of the presentation is.

Rather than picking one of the two you actually control both at the same time. Sort of. One is the lead and the other follows. Both characters have the same controls but the difference comes in their team up attacks. Using different button combinations you can use your partner to perform a variety of functions needed to get through the levels. Ren will squeeze Stimpy to jump higher, Stimpy will use Ren as a shovel to dig, hell he even uses him as a boomerang. While the moves are more or less the same for both characters their workings differ and require more nuance. When you use Ren as a helicopter to reach higher ledges you have to consider Stimpy’s placement to land properly. The Ren boomerang is more effective than Stimpy’s spitballs since it does damage on the way back. You can switch between both characters at any time which is part of what makes the game so fun.

The excellent controls make guiding the duo simple but the game really shines in multiplayer. With a skilled friend the communication performing combinations engenders is really awesome. Multiplayer has never been my cup of tea (yet I play World of Warcraft, hmm) but I thoroughly enjoyed every second of this, deciding who will take point, positioning, and execution. It’s some of the most fun I’ve had in coop.

There’s a great deal of variety from one segment to the next with no two levels feeling the same. There are plenty of cameos from even minor characters in the show. One minute you’re hopping on the backs of hippos in a zoo then you’ll fill up with helium and use you farts to propel yourself through the air. There’s a nightmarish bike ride through traffic and then the game gets really trippy leading up to its conclusion. I’ll say this: while the majority of the game is relatively normal by series standards it goes completely off the rails when you have flying eyeballs, floating noses, and then you actually get to go inside Stimpy’s dumb ass device.

There’s just one problem: it’s too short. With a mere six levels the game is over far too quickly which is a crime as it is so enjoyable. Though each of the levels comprise multiple parts I can’t see anyone having trouble blowing through the game in a little over thirty minutes, especially since it is so easy. Aside from a few frustrating sections (namely bike riding in the city) the game offers very little challenge which makes it even worse. With just a few more levels this would have been among the best action games for the system.

If only the game were longer this could have been a classic. As I mentioned before even if this were divorced from its license it would still be a great game in single or multiplayer. It’s rare to find a licensed game that uses its source material so well and turns out to be an awesome game at the same time but Stimpy’s Invention accomplishes both with aplomb. Buy this game.