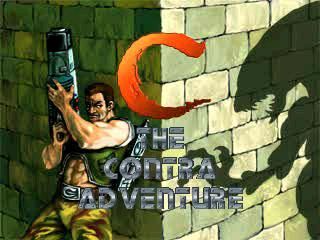 Sometimes I’m left speechless.  As bad as Legacy of War turned out you’d think Konami would have gone in a completely different direction to get away from that abomination.  But less than 2 years later we have another terrible Contra game that has many of the same flaws as the original.

C: the Contra Adventure was released in 1998, with development once again handed to Appaloosa.  For the life of me I don’t know who made that decision but whatever.  This was only released in the US which should immediately set off warning flags.  The story continues on from the end of Legacy of War.  The alien that survived by stowing away on a meteorite eventually crash lands on Earth.  After occupying a Mayan temple it begins its assault on the planet.  Tasha is sent in to investigate but goes missing, leaving Ray Powered to rescue her and destroy the invaders.  No multiple characters here, this is a solo mission.

Gameplay now consists of many different viewpoints in an attempt to alleviate criticisms lobbied at the first game.  Throughout the 10 levels you’ll play through side scrolling stages reminiscent of the original games, third person segments, an overhead level like Legacy of War and even a throwback to the base assaults in the first Contra.  The whole game tries to ride on nostalgia to make you forget about the missteps taken with the last game.  A nice thought, but they almost completely fail at doing so.

They hit the nostalgia button haaaaaard on these levels but it doesn’t work.

Things start off with a side scrolling level just like Contra III.  Like the games of old, you scroll left to right blowing up everything in sight.  Although constricted to a 2-d plane everything is made of polygons.  The 3-d is used to great effect in the backgrounds as they shift in real time as you progress.  Even considering the game’s age the effect is slightly impressive.  These parts may at first seem the game’s strongest suit but then the issues creep in and ruin the experience.  The jumping is floaty as hell and not very precise.   Because there is no sense of weight to your body you’ll easily misjudge how far you’ll travel and miss many of your jumps.  The platforming never feels precise and a lot of  ledges seem a touch too far, forcing you to inch your way to the very edges of a precipice before jumping.

There’s a generous auto aim that can help with targeting but many times the background shifts will throw it off, leaving you to get in close to make your shots.  The weapons never feel like they have any punch to them; bosses have long life bars that drain slowly and none of your weapons seem to do any significant damage, a criticism that extends to entire game.  These levels drag on far too long with no checkpoints,  making them a chore to slog through.  The overall sloppiness is what hurts these levels.  They never feel as tight as they should.

Ugh, these screenshots encapsulate everything wrong with these segments.

The third person levels are absolutely terrible and make up over 60% of the game.  Where do I even start?  The camera is far too close leaving large chunks of the playing field concealed.  The draw distance is abysmal, and combined with the infinitely re-spawning enemies is a nightmare.  Because the camera is so close, you won’t see enemies that are literally 2 feet above you.  Far too many cheap hits come from corners of the screen you can’t see.  There is no map and these levels are large with many sections looking identical.

Navigating these levels with all of these problems is hellish and I haven’t mentioned the worst part.  Tank controls.  Tank controls have no place in third person games whatsoever unless they are named Resident Evil and I barely tolerate it in those games.  Bad enough you can’t see where 90% of the attacks are coming from, now you have to turn like a robot in hopes of counterattacking.  I want to shoot whoever invented tank controls, just so you know.

Amazingly enough the overhead levels are the strongest.  These are true overhead with a camera zoomed out to a comfortable distance so you can see as far as the draw distance will allow.  Platforming is kept to a minimum and even then only in a straight line, none of that weird circular shit from Legacy of War.  The tank controls don’t get in the way as all enemies are on the same plane and the auto aim will adjust accordingly.  Oddly enough, boss fights give full range of movement like every other third person shooter.  Had the game been made up of just these stages it would have been a much better product.

There you have it.  As bad as the last game was this is worse in some ways.  The sentiment was there with the throwback levels but unfortunately they failed in the execution.  After the failure of the last game you would think they would have made absolutely sure to avoid any comparisons to that travesty of a game but that isn’t the case.  Replay any of the old games and pretend this game doesn’t exist like the rest of the world.