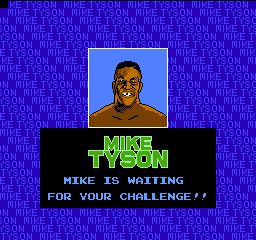 The boxing game even non fans of the sport like.  That describes Mike Tyson’s Punchout! aptly well.  The game’s reputation has transcended even the video game industry, largely thanks to Mike Tyson’s endorsement and later shenanigans.  However, at the heart of it all lays an excellent take on video boxing.

Developed by Nintendo in Japan undoubtedly for the US market, Punchout! was released in 1987 in North America.  A loose adaptation of the Punchout! Arcade game, it actually only borrowed the framework while going off in its own direction.  Some of the boxers carried over but for the most part the cast was all new.  The story has your unlikely protagonist, Little Mac, working his way from the Minor Circuit to the World Circuit to face Mike Tyson in a dream match for the World championship.  It’s a hilarious situation when you think about it.  If this were the real world we all know how this would end:

If this were real that’s how it would end.

But it’s a video game so you can suspend your disbelief.

Hang in there?  Dude my face looks like a slab of roast beef!

Little Mac himself, the star of the show, will make you root for him just a few matches in.  With his trainer Doc in his corner he’s ready to take on all comers despite lousy advice form his coach.  Barely reaching the waist of most of the opposition, its damn near implausible that he could ever possibly win against even a lamer like Glass Joe.  I mean Jesus; Bald Bull’s fists are half the size of his body.  This is where your arsenal of moves comes in.  Your repertoire of moves consists of Left and Right Jabs, body blows, and an uppercut that consumes stars.  For defense you can dodge, duck, and block, the last of which depletes your heart meter and leaves you tired and unable to attack when depleted.  That’s it.  No further upgrades, nothing.

And this is where the genius of the gameplay lies.  By observing each fighter, their “tells” become obvious and you respond in kind.  Your limited cache of moves will soon seem like a militia once you’ve figured out each boxer’s weakness.  Timing your jab to one shot Bald Bull during his bull charge is magnificent in action when you “get” it.  Downing Don Flamenco with a never ending series of left right jabs without giving him a chance to respond is like poetry in motion.    These boxers are the other half of what makes the game so memorable.

The animations on the boxers are incredible.  Every last one is memorable.

The colorful cast of boxers that make up your opponents are almost as memorable as the Little Mac himself.  They come from various countries around the world, some real some fictional, and also embody various stereotypes.  It almost doesn’t do them justice to call them boxers; these are characters unto themselves.  It’s amazing how a few lines of dialogue in between rounds and slight mannerisms can create such memorable impressions in the brain.  King Hippo hopping around the ring and pulling his pants up after every punch, Super Macho Man flexing his pecs, or even Don Flamenco taunting you to take a swing at him, it’s amazing what a few simple animations can do.  These weren’t all just for show, the varying ticks and idiosyncrasies that each opponent had were the key to beating them.  The bosses were less boxers and more separate puzzles that you had to figure out in order to beat them.

Learning the timing of a particularly brutal uppercut, which punches to dodge and which to block and when to counter are all key.  The learning curve can be steep at times and discouraging in that the progress you make doesn’t carry over to the next fight. No two fights play alike and just because you know the strategy involved in winning a fight doesn’t guarantee victory.  Timing your punches and dodges still play a factor no matter how skilled you become.  Later in the world circuit when you have rematches with certain opponents like Bald Bull there are conditions that need to be met to win, further throwing you off.  All these are just an appetizer for Mike Tyson.

Prepare to see that a lot.  If you can survive past the first minute and 30 seconds there’s a slim chance of victory.  Slim.

By now the fight against Mike Tyson has become something of a video game legend.  Mention this game to anyone who has played it and you’ll get varying stories of losing in the first round, the fight being over in less than 30 seconds, even accounts of not knowing what the hell just happened.  And they’re all true.  For his time, Mike Tyson was the ultimate video game boss, designed to crush any dreams you had of beating the game.  All of his punches knock you out in 1 hit.  To make matters worse, you have a fraction of a second to react.  The first few times dumbfounding as to how it would even be possible to win.  But then a miracle happens.  You last longer.  Sometimes 10 seconds, then 25.  Eventually you notice his punches change and you can survive a few hits.  The skills you built up playing the game are now facing the ultimate test and it’s all up to you to rise to the challenge.

That knowledge you build up is also I feel a large reason why the code to fight Mike Tyson was so widespread not long after the game’s release.  Every magazine of the time printed it and I wouldn’t be surprised if Nintendo themselves leaked it.  It’s a strange idea but here me out.  Yes, the code takes you to the final boss.  But without having played the game all the way through, learning timing, patterns and such, it’s absolutely guaranteed that you will lose every time.  I could even see it as a promotional tool to give the less skilled a shot to at least see Mike Tyson.  But enough of my conspiracy theories.

Regardless of all that, the game absolutely holds up even to this day.  Great graphics, precise controls, and a challenging but fair level of difficulty means you’ll get your money’s worth out of it.  The game is legendary in the NES library for a reason.