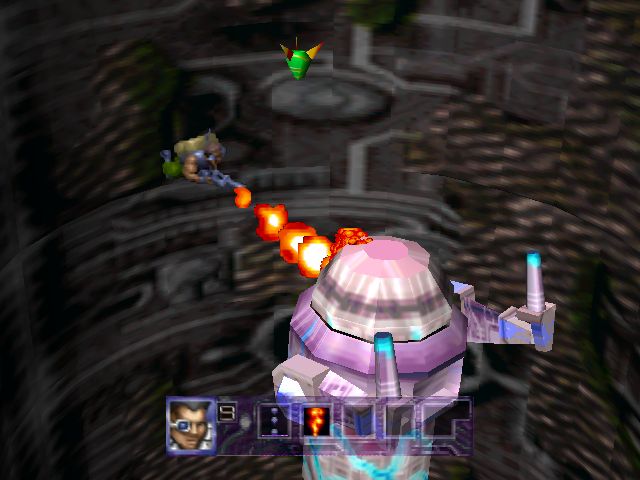 Oh lord where do I even begin.  I don’t go into a game expecting to absolutely detest its existence but sometimes its unavoidable.  This is one of those cases.  I just don’t understand how a developer can create such a flawed experience that shows its cracks right from the start, let alone a publisher of Konami’s caliber signing off on it.  But here we are with Legacy of War literally shitting the bed.

Contra Legacy of War represented a few firsts.  The first multi platform Contra, in this case PlayStation and Saturn.  The first 3-d Contra title, actually in 2 ways.  But the optional 3-d mode that requires the glasses that are packaged with the game is so stupid it’s not worth mentioning.  And the first to be developed by an external developer, Appaloosa Interactive, creators of the Ecco the Dolphin series for Sega.  With those lofty expectations in front of it I guess you could say it was destined for failure.

Colonel Bassad has allied himself with aliens and started to amass an army to take over the world.  Ray Powered returns from Contra Hard Corps with a new team of soldiers to take down this combined threat.  Spread across 7 levels, the game is played from an overhead isometric perspective, a throwback to select stages from previous Contra installments.

God even the character art is amateurish.

Like Contra Force and Hard Corps, each member of the team has 4 weapons with 2 shared and 2 distinct.  Each member also varies slightly in terms of movement speed and jumping ability.  So far so good.  The now legendary difficulty of the series is here in full force, not always for the right reasons.  The hectic pace of the series is maintained as enemies swarm from all directions and will keep you on your toes.  The fundamentals are in place for a good action romp, but the basic gameplay mechanics are where the game completely falls apart.

Just a few minutes into the game and you’ll start to see the problems surface.

Because everything is in 3-d, enemies come from all directions.  You have no targeting options, just a strafe that locks your fire in one direction.  This doesn’t always work however, leaving you firing in random directions when it craps out.  You have no control over the camera so the doors and such that can be destroyed to reveal items are obscured the majority of the time.  I guess this is so they are “hidden” but it also creates issues where enemy fire can’t be seen and it happens far too frequently.

The biggest issue in my opinion would be the airborne enemies.  In prior games with overhead stages all enemies were on the same plane to keep it simple.  Here they come from every direction, even above.  Without the ability to specifically target them you have to jump and pray to god your bullets hit.  This becomes an even bigger problem when you have to hit particular weak points that require you to jump and fire.  Literally 5 seconds into the game you’ll see this exact problem rear its head.  Prior games gave you visual indicators that you were damaging enemies or bosses like hit sparks or flashes when you connect.  There’s little of that here.  You might face a boss with a weak spot that flashes when hit only to run into another that has no indication whether you’re damaging it until they die.  Sounds minor but the inconsistency is infuriating.  Another thing:  the weapon falcons also fly overhead, and you guessed it, you’ll have to jump and shoot at them too.

Look at that.  I can’t believe I even bothered to play through this.

The floaty jumping makes the already bad decision to include platforming even worse and the second half of the game focuses on that aspect of the game heavily.  The issue with the platforming is a matter of depth perception.  Ledges are arranged in wildly varying sequences and because you can’t move the camera it becomes a hassle to line up.  The last 3 stages require precision jumping to proceed, and taking into account everything I just mentioned are a nightmare.  The final level in particular is near incomprehensible to navigate because of this.  Its bad enough the ground is near transparent, some genius decided to add a large face in the background that obscures the playing field even more.  Why the hell would you include platforming in an overhead shooter anyway?  I just can’t fathom how so many of these issues were overlooked, most of which you get to experience within 30 seconds.  I’m fully aware that that generation of consoles were most developer’s first stab at 3-d, but it isn’t fair to charge money so you can shed your training wheels.

A pretty decent soundtrack does not make up for the crippling faults in the rest of the game.  This was just the first misstep Konami would make with the series and wouldn’t be the last. The downward spiral would not take long to continue and forced the series to hibernate for a few years.  Absolutely do not play this game and tarnish whatever good memories of the franchise you have.

They actually had the nerve to leave the ending open for a sequel.  And you know what?  They did!  That means a group of dumb assholes bought this game in large enough quantities to warrant a sequel.  I hope you’re proud of yourselves!