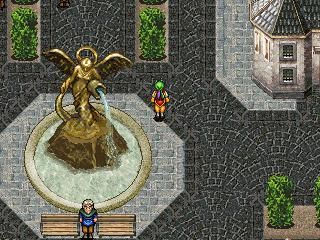 What makes Suikoden unique?  On the surface is a game that could just as easily have been created for the SNES.  Outside of the quality of the music and color depth, there was nothing about the game that screamed 32-bit on the still new Playstation.  Loosely based on the Chinese novel Shui Hu Zuan, inspiration is drawn from that storyto create the framework for the entire series.  What elevates the game, and the whole series itself to top tier status is its numerous successful attempts to avoid most cliches of the genre and introduce its own unique spin on what a Japanese RPG entails.

My initial exposure would come from the numerous articles Gamefan ran about the import.  Prior to their coverage no other publication even had the game on their radar.  I would even go as far as saying their repeat coverage might have played a part in Konami giving it a chance in the US market.  Whether that is actually true or not is irrelevant; in the end the US received one of the best RPGs created for the console and thankfully it sold well enough for the series to continue.

Suikoden stars Tir Mcdohl (you can change the name), the son of one of Emperor Barbarosa’s five generals.  As the son of a general you live a life of luxury with all of your friends living at home with you and an over eager manservant at your beck and call.  With your father sent away on business you are called into the empire’s service and are slowly exposed to the dirtier side of what you thought was a prosperous kingdom.  The townspeople mention it everywhere you go, but it isn’t until you see it with your own eyes that you realize something is wrong with the king.  Through a series of unfortunate events, you are branded a traitor, forced to run away from home, and eventually become the leader of the Liberation army.  It is here with the unique identity of the series is formed.

Forget any notion of saving the world from an all encompassing evil.  All Suikoden games focus on a singular conflict and has you raise an army to fight a corrupt military or government.  That’s it.  There isn’t any typical save the world plot here.  Just a simple clash of ideologies.  To the characters of the story, the struggle against their ruling body is equivalent to saving their world.  No Suikoden game has yet to allow you to explore the entire world.

Each game in the series focuses on a specific region and conflict.  In addition, your main character will also come into possession of one of the 27 true runes that govern all magic in the world, whether they like it or not.  The runes are the source of all magic and for the most part the conflicts in each game arise because of 1 or more of these runes.  With absolute power over the elements, life, death, etc. these True runes also grant immortality. The struggles caused over possession of these runes is what involves the general populace.

While there are thousands of nameless peons who join you in the tactical battles (more on that later), your primary concern is to unite all 108 stars of destiny.  As the Tenkai Star, you are marked from birth with a destiny that will change the world, and finding the other 107 stars is crucial to fulfilling that role.  This is one of the biggest departures from standard RPG conventions, as a significant portion of those 107 stars are playable characters you can form a party with to explore the world.

One of the most exciting parts of any Suikoden game is stumbling upon one of your eventual comrades and figuring out how to recruit them.  When you see someone who definitely looks different from the norm and has their own character portrait you know they can join you; you just have to figure out how.  As the first game, most of these are fairly straightforward and will join you automatically when met or at certain story junctures.

It’s the one that don’t that are the most fun to deduce.  With a wide range of personalities its natural that everyone will form their individual dream team; with so many to choose from learn ing their quirks is extremely fun.  Not everyone that joins is a fighter.  Some will create the shops that you will make extensive use of, some for the tactical battles, but most are used in the random battles.

Most RPGs give you a 3-4 character battle system.  Suikoden gives you six.  The enemies can also attack in groups of 6-9.  Despite these large numbers, battles move extremely quick.  After giving orders to everyone sit back and watch the ensuing carnage.  Both characters and enemies execute their orders at the same time which keeps battles moving at a brisk pace.  The battle camera zooms in randomly for critical hits or heavy spells which I guess is supposed to be cinematic but in practice is quite ugly.  All characters have a set range for their attacks, with ranged able to attack any enemy in the front or back row, medium range can attack anyone if their placed in the front line but only the front row of enemies if placed in the back, and short range is obvious.  Range also determines attack power, with long range characters sacrificing power for distance.

Managing your party is key;  if you don’t pay attention you can end up with 6 short range members leaving 3 of them useless in every battle.  With the right combo of characters you can unite attacks or magic, sometimes up to 5 characters for one large death dealing blow.  Adding elements typical of strategy RPGs and integrating them so effortlessly was a stroke of genius on Konami’s part.

The other types of battle are the duels and the strategic war battles.  Duels are one on one and follow a rock, paper, scissors format using attack, defense, or special attack.  Your only hint as to their next action are their comments in between rounds.  If you pay attention, even a weak character can destroy a brute in terms of strength and walk away unscathed.  The tactical battles are where the army you’ve nurtured come into play.  Those 107 stars you’ve gathered?  They are your generals.  The more you’ve recruited when the battles start, the larger your attacking force will be.  To some degree this is balanced, there are enough characters who join automatically that you can somewhat fight on even ground if you are somehow lax in recruitment.  These battles also follow the rock, paper, scissors set-up except you are largely left to trust your instincts in terms of attacks.

All of your characters are housed in your fortress which you name.  Your fort starts out as a dingy hovel but as more characters fill the ranks it upgrades.  The shops will get bigger and have more stock and the various mini-games start to pile up.  It becomes a virtual mall, all for your benefit.  No more tedious traveling to some backwoods town just to buy the strongest armor or weapons.  Some of the best moments come from wandering around the castle and speaking with your army.  These are their character development moments, as their feelings change as the story progresses.  It’s also nice to see which characters are mingling and forming bonds which you get to see the fruits of in future sequels.  These interactions definitely give you the sense that this really is war; these people are putting their lives on the line for you.  You owe it to them to win so that they can go back to their lives or even accomplish the goals they might mention while speaking with you.

There are multiple endings depending on whether you have collected everyone or not.  The big payoff comes from seeing what everyone gets up to in the end as they leave the castle one by one.  The impact the war you lead changes many of their lives, mostly for the better.

Any new RPG series has its work cut out differentiating it from the more established franchises we know and love.  By using outside sources of inspiration rather than its contemporaries Konami forged their own path to success.  I didn’t even mention the outstanding Celtic soundtrack, a style you don’t see too often (if at all) in gaming.  Every element of the game eschews genre conventions and I love it for that reason.  The game isn’t very long so any casual player can complete it without setting aside a large amount of time but you’ll do so anyway because its that good.  Classic.