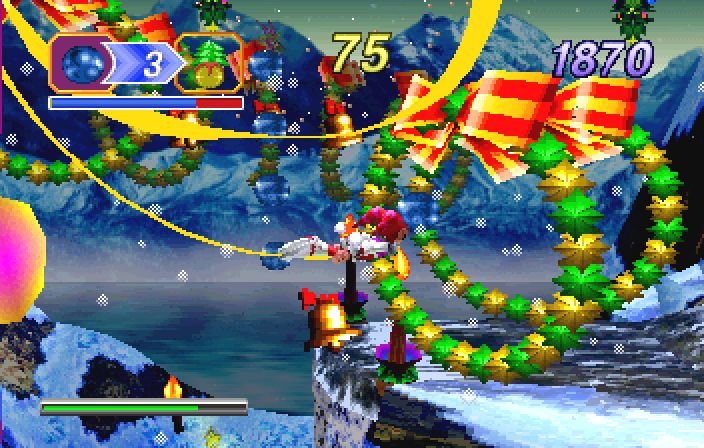 Say what you will about Sega but at the very least they’ve always shown that they care about their fans.  The period between 1995-1998 was tumultuous for them to say the least but even in spite of their sinking fortunes they still found time to throw the fans a bone.  Nights into Dreams was their major holiday release in 1996 once Sonic Xtreme was delayed but its initial release was rushed.  Rather than charge full price as a separate release Christmas Nights as it was called was instead bundled with various magazines back in 1996 as a demo/thank you to the fans.

Both Claris and Elliott are celebrating the holiday season after their adventure in Nightopia but can’t shake the feeling that something is amiss.  The two discover that the Christmas Star that lights up the Twin Seeds Christmas tree is missing and set out to Nightopia to recover it.

Despite the story taking place after Nights into Dreams this isn’t a sequel.  As a sampler disc intended to give gamers a taste of what the full blown version of Nights has to offer the game more than succeeds but it also has enough content to stand alone as an individual release.  For those that were enamored with Nights’ gameplay Christmas Nights has a number of extra modes that extend the life of the game.  If the gameplay wasn’t your cup of tea than there isn’t much to change your mind.

The primary thrust of the game is the two separate paths through Spring Valley for both Elliot and Claris.  Since Spring Valley was exclusively Claris’ dream Elliot’s version has a new layout.  Even if you’ve played the original release the Christmas version of the level feels completely new thanks to the holiday decorations strewn throughout.  The Ideya Capture is a Christmas tree, items have become Christmas presents, and the Nightopians now resemble elves.

The goal is still the same, to collect enough Ideas to destroy the Idea Capture and use the remaining bonus time to accumulate the highest score possible.  Prior knowledge of Spring Valley will come in handy to maximize your score, something that actually has an actual tangible bonus attached now.  After beating GIllwing your score is tallied up and used to determine how many chances you have to open presents.

A simple match making game will unlock a large number of extra features, most of it high resolution artwork.  However hidden underneath the cards is a selection of extra modes all accessible through the Presents menu.  If you’re good enough it should only take 4-5 runs to unlock everything.  The Karaoke mode simply allows you to sing along with the series theme song Dreams, Dreams with lyrics on screen so you don’t embarrass yourself.  In fact the entire soundtrack for the original game is here for your listening pleasure with tools to dissect and manipulate each song.

The three most substantial extra are Sonic into Dreams, Time Attack, and my personal favorite, Link Attack.  Sonic into Dreams casts you as Sonic the Hedgehog, free to explore Spring Valley as you see fit since the alarm clock no longer exists.  You still have to collect ideas and blow up the idea capture except Sonic can only run and jump extremely high.  His limits were taken into consideration so that any stray ideas will automatically come to you once close enough.  The boss is a Robotnik skinned version of Puffy complete with final boss theme from Sonic CD to boot.  Personally it’s a minor curiosity for those interested in what it would be like to control Sonic in a full 3d world.

Time Attack is a smaller section of Frozen Bell which tasks you with collecting all of the items in the area and reaching the goal as fast as possible.  Link Attack arranges a set number of ideas, rings, and stars along the course and seeing how high of a streak you can build up and keep going.  It’s a short course but there are definitely a number of minor tricks you can use to keep that number climbing higher, especially as the window to get the next link shrinks the longer you progress.  My only issue with these extras is that it’s only the one course for each but this is only supposed to be a sampler after all.

But there’s more!  Although it’s called Christmas Nights playing around with the Saturn’s internal clock will release even more extras.  Outside of Christmas the game defaults to just the regular versions of Spring Valley.  During November and January the game will have a winter theme minus the Christmas story to match.  Finally April Fool’s Day will unlock Reala as a playable character who is sadly only a reskinned Nights.  I guess we can appreciate the gesture.

Finding an original Christmas Nights is all but impossible but fear not!  The recent rerelease of Nights into Dreams on XBLA, PSN, and  PC includes Christmas Nights meaning you get the full game as it was originally intended.  At $10 or $15 you’ll more than get your money’s worth with this excellent package.