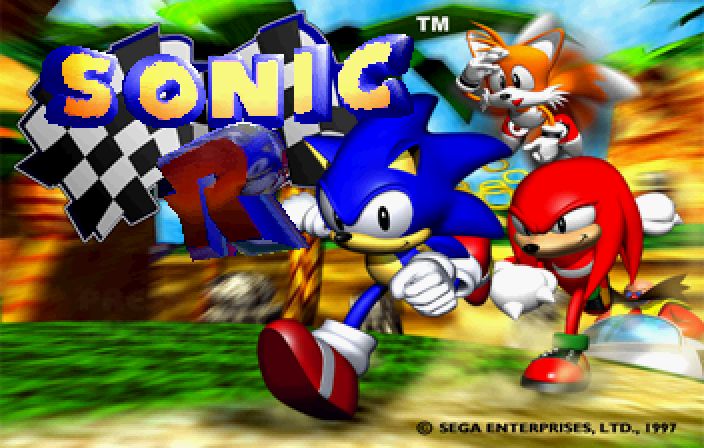 It only made sense that Sega would follow in Nintendo’s footsteps and branch Sonic out into other genres.  The public couldn’t get enough of him and spinoffs allowed them some breathing room while working on the next major installment in the series.  This goes back as far as Sonic Spinball but it was still disappointing when Sega announced Sonic R, a racing game for the Saturn instead of the platformer gamers wanted.

Sonic R was developed by Traveller’s Tale once again and released in 1997.  Plot?  You don’t need any plot, it’s a racing game.  Sonic and friends hit the tracks to see who is the fastest that’s all you need to know.  This was not the first time Sega attempted to make Sonic lace up his shoes; the two Sonic Drift games for Game Gear preceded this but they were terrible.  Is the third time the charm?  I won’t keep you in suspense and simply say no, it is not but not for a lack of trying.  With just a little more work this could have been a decent game but is instead a forgettable misstep in terms of Sega’s handling of the character.

If you are at all familiar with Super Mario Kart then you know what to expect.  Up to 5 characters compete at the same time among a selection of 10.  On the surface the gameplay is almost exactly like SMK however Sonic R does enough to forge its own identity.  Rings collected around the track serve two purposes: speed boosts along the tracks consume 50 rings for a massive boost and certain gates require set amount of rings, granting access to shortcuts or hidden items.  Platforming is also implemented to a degree with each character possessing unique abilities that can spell the difference between a win or loss.  This would have made for a decent overall package if not for the numerous issues.

My two biggest beefs with the game are the pathetic controls and its brevity.  I can understand the developers wanting to convey the sense of speed but it shouldn’t come at the expense of the controls.  You don’t steer Sonic and pals so much as fling them around.   You move entirely too fast, making the simplest turns an exercise in frustration.  Most tracks have no boundaries so you’ll be spending more time out of bounds than finishing the race itself.  Sadly Sonic R is seriously lacking in substance as well.  There are only 5 tracks in total along with a time trial and a 2-player mode for longevity.  I guess 5 tracks was slightly more than the standard 3 most racing games of that era peddled but the vast majority of kart racers have always provided a greater selection that this game is missing.  But that simply isn’t enough.  You can see all of the content in the space of 1 hour.  6 of the 10 characters have to be unlocked but they are mostly lame robotic versions of the principle cast.

Sonic R was something of a technical powerhouse on the Saturn.  Much was said about the transparency technique employed to hide pop up and simulate hardware transparency and for the most part it works.  Sonic R has a very clean look unmatched by a significant portion of the Saturn’s library and they were able to hide the system’s deficiencies pretty well.  I can’t go any further without mentioning the music.  All of the tracks have vocal themes associated with them and the music was composed by Richard Jacques, of Sonic 3d Blast fame (or infamy).  Opinions vary from brilliant to fruity and cheesy; I fall somewhere in the middle.  The actual songs are well composed but the lyrics are cheesy.  But in the end it grew on me over time.

At this point there is no reason to even bother with Sonic R.   Hell it wasn’t worth it back in 1997 as anything other than a technical curiosity.  Less than an afternoon’s worth of content and shoddy controls mar what could have been a decent racer.  As it stands this is a reminder of Sega’s incompetency during that console generation.