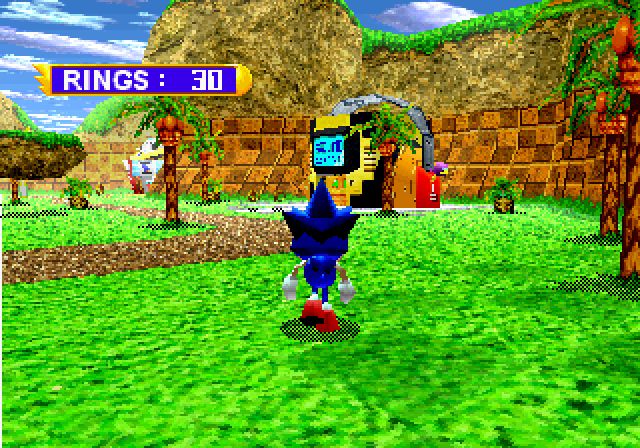 In this day and age of constant retro compilations anyone can experience classic gaming from years past.  It’s hard to believe but at one point such collections of old games were not very common, with the main standout being Super Mario Allstars.  In 1997 Sega graced us with Sonic Jam, a set that was more interesting for its extras than the games it compiled.  That really sounds like I’m dogging the original quadrilogy but I’m not.  The bonus features included really make this package special as it was the rare peak behind the curtain behind the internet really became so ubiquitous.

Sonic Jam was released for the Saturn in the summer of 1997.  A collection of the 4 main Sonic the Hedgehog games on Genesis, Sega did not stop there and added a host of extras, with a 3d overworld that leads to each one.  This was part of a two pronged assault, with Sonic R following later that year.   While the emulation is spot on and the extras are nice Sonic Jam mainly served as a reminder of what we should have received on the Saturn; a fully fledged 3d platformer.  With such a ridiculously good engine made specifically for its overworld I find it hard to believe that Sega of Japan didn’t have something in the works.  What could have been…..

All 4 games here are represented fully intact so those of you that weren’t born during Sonic’s heyday could experience the magic all in one package.  In addition to the ports customized versions of each game are available.   These offer easier difficulty, slightly redesigned levels and for those that are weak sauce the removal of harder zones.  Honestly if you need the game to baby you by removing what are considered “hard” stages you suck at video games but I digress.  The real meat of the package comes from the extras.

Rounding out the collection are a ton of extras, from advertisements, artwork, a retrospective of the series, and a jukebox to listen to the classic tunes.  The jukebox is a really awesome feature as the series has always had exceptional music and video game music CDs were still not common outside of Japan.  You can even view the animation sequences from Sonic CD, which should have been part of this collection as more people needed to experience its greatness.  Granted now you can find all of the information provided by this collection on the internet but for its time it was interesting to see what was included from Sega’s archives.  The star of Sonic Jam would have to be Sonic World though.

Sonic World as it’s called was the overworld map used to access all of the content.  A full 3d engine was made specifically for the game and it is impressive.  While not on the level of Mario 64 or Crash Bandicoot it was close and showed that the Saturn was capable at 3d when in the right hands.  The detail of the world is incredible for the time and would have made an excellent base for a platformer but sadly that would never happen.  The only activities you can partake in here are minigames such as collecting rings for missions, reaching the various markers, and locating Tails.  You kind of have to question why they would make such a good engine and only use it for such a minor project but I’ve long since stopped questioning Sega’s wackier decisions.

This was an interesting collection back in the late 90s but now you can get all of the same games plus almost 40 others in the Sonic Ultimate Genesis Collection.  Now Sonic Jam is a cruel memento of the period when Sega did not have its shit together during the Saturn era.