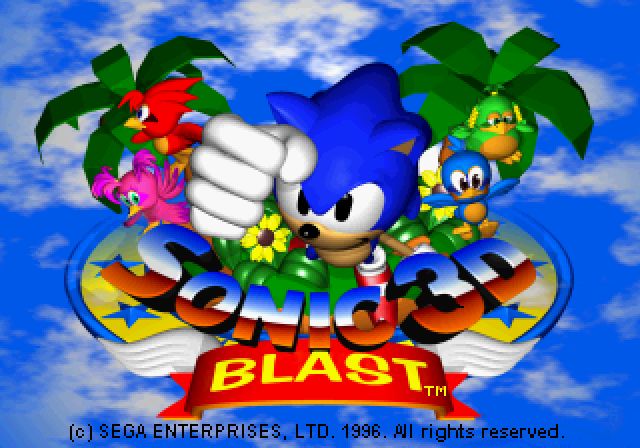 Volumes can be written about the various missteps Sega made with the Saturn.  From the surprise early release, exorbitant price point, and lackluster offerings Sega of America focused on instead of bringing Japanese exclusives it was an unmitigated disaster.  Probably the biggest crime was never releasing a pure Sonic game.  Oh there were Sonic games for the Saturn but almost all were externally developed and the exact opposite of what gamers wanted.  One of those was Sonic 3D Blast.

Sonic 3d Blast was developed by Traveler’s Tale and released in the fall of 1996 for both Genesis and Saturn.  Dr. Robotnik has discovered the Flickie’s power to teleport by using large rings and decides to exploit it for his own benefit.  Sonic discovers what is happening and decides to help.  Released simultaneously Sonic 3d Blast was something of a technical marvel for the Genesis.  The Saturn version while slightly enhanced does not dismiss the fact that it was a lame port to cover up the delay of Sonic Extreme, which was eventually cancelled.

Played from an isometric perspective, Sonic 3d Blast has you collecting Flickies from defeated enemies.  The Flickies have fall into 4 types with differing behavior once released.  They also serve secondary purposes such as helping you reach higher items but their primary function is to grant access to later sections of every act.  The Special Stage is accessed by finding Knuckles or Tails with 50 rings intact, with the level varying depending on which version played.  In many ways this resembles the SegaSonic arcade game released everywhere but the US.  But despite that the main problem is that this doesn’t feel like a Sonic game at all.

I’m not even referring to the perspective, although that presents its own set of issues.  Running around collecting birds is not the slightest bit fun and the pace of the game is plodding at best.  There are usually only 5 enemies in each area and they don’t seem the slightest bit interested in you.  Because of the perspective each area is small and doesn’t give you any opportunities to build up speed.  More than likely this is so you don’t go careening into walls and unseen enemies.  Sonic without his speed might as well be Mario in this case.

The loops and bumpers endemic to every Sonic game seem shoehorned in at best and are token gestures to tie in with the rest of the series.  While later levels ratchet up the number of hazards it doesn’t change the fact that you’ll do the same thing every level: kill 5 enemies, collect the Flickies and jump through a giant ring, 3 times per level.   With 6 Zones composed of 2 Acts and a boss level it gets tiring quickly.

On the Genesis Sonic 3d Blast was unique in that rendered graphics and full motion video were not too common on the platform.   The environments are highly detailed and full of color (well as much as the Genesis can muster).  While the FMV intro was never pretty to look at props to Traveler’s Tales for even cramming it in there to begin with.

The Saturn version is enhanced but not to the degree you would expect.  The amount of colors has been increased, numerous environmental and weather effects have been added but for the most part it still shares a similar look to its 16-bit counterpart.  The Special stage is a true 3d version of the half pipe from Sonic 2, a look at what could have been.  What did get upgraded is the music: it’s awesome.  A variety of composers contributed to the soundtrack and its excellent all around with themes that match each Zone perfectly.

While it isn’t terrible it is boring.  You could just as easily drop any other character in this game and it would have made no difference.  As the last Sonic the Hedgehog game for Genesis and the Saturn’s Christmas holdover in 1996 Sonic 3d Blast fails in both respects.