Championship Bowling NES Game Cartridge
Championship Bowling was released for the NES in 1989. It was developed by Another Ltd and published by Romstar. The game will play like standard bowling with 10 pins and 10 frames with the goal of knocking down the most pins possible. The player will have a choice of five different lane designs, four different characters, and the ball weight they want to use. The player will then be placed onto a lane. The player will then pick the spot that their character will throw the ball from. A control panel will be used to time correctly and stop a ball at an angle the player desires and then stop a Power bar that will give the player amount of power desired. The weight and power of a ball will determine how it is handled. Four people can play with the Four Score NES accessory, with each player taking turns.
UPC: 0-95474-11010-2
Platform: NES
Players: 1-4
Condition: Used
Genre: Sports
Region: NTSC (North America)
Rating: Everyone 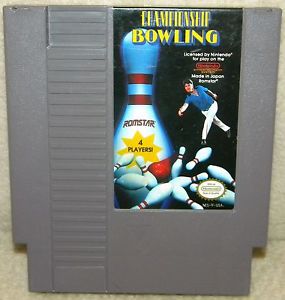