Mystery Quest NES Game Cartridge
Mystery Quest was released for the NES in 1988. Carry Lab developed the game and Taxan published it. It is modified from the game Hao Kun no Fushigina Tabi from Japan. The player will take control of Hao, who is a wizard apprentice finally getting a shot to prove his worth. The Great Wizard challenged Hao on finding the four talismans that are hidden which he has spread out in four separate castles. The character the player uses has one magic attack and it can upgrade just once throughout the game. The player will be able to shoot right and left including jump shot and shots angled upwards. There will not be many items on the player’s quest that will help in the game. The three area types in Mystery Quest are outside areas, areas inside castles, and underground areas.
UPC: 0-40886-69783-3
Platform: NES
Players: 1
Condition: Used
Genre: Platformer
Region: NTSC (North America)
Rating: Everyone 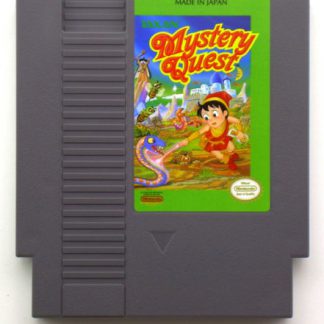