Mega Man NES Game Cartridge
Mega Man was released for the NES in 1987. It was developed and produced by Capcom. This was the first Mega Man video game ever created. Before this game, Capcom focused on making arcade titles. Mega Man’s development team only had six people, and Capcom wanted to bring in young and fresh talent for that small team. The small group included Keiji Inafune, who recently graduated college and had his start with Street Fighter’s team. Inafune and the rest of the team worked really hard on completing the last product, having a lead designer and project supervisor seeking perfection in each possible part in the game. Critics had praised the game for its design. The gameplay, graphical conventions, and story defined the sequels, spin offs, and sub series. In 2006, Mega Man received a 3D remake that was called Mega Man Powered Up.
The plot, with the North American version having some changes from the Japanese plot, takes place in 200X, with Dr Wily and Dr Light co-create Mega Man, a humanoid robot. Six other advanced robots were created alongside Mega Man, with each of them being designed for benefiting the Monsteropolis’s citizens. These six robots were Elec Man, Fire Man, Bomb Man, Ice Man, Guts Man, and Cut Man. Dr Wily one day grew disloyal to Dr Light and reprogrammed the six other advanced robots to help him take over the world. Dr Light then sends out Mega Man in hopes of defeating his ex assistant Dr Wily and the six robots. Mega Man eventually defeats the other robots and recovers all of their cores. He then goes to confront Dr Wily inside his robot factory. Mega Man defeats Wily and returns home.
The game will consist of six levels that are side scrolling, with the player able to choose them freely. In every level, the player, as Mega Man, will fight through a variety of obstacles and enemies before they face the level’s Robot Master at the end. After defeating a boss, the player will assimilate the Special Weapon, the boss’s signature attack, into their arsenal for future use the remainder of gameplay. Unlike the Mega Buster, Special Weapons will have limited ammo that can be replenished with ammunition cells collected from defeated enemies that drop them randomly. The enemies will also drop cells that will replenish the player’s health gauge. Every Robot Master will be especially weak to a certain Special Weapon. This will encourage player’s to complete specific stages first. Cleared levels can also be revisited.
The player will be able to find the platform generator called Magnet Beam in the stage with Elec Man. There is a scoring feature where a player will accumulate points after defeating enemies. Extra points can be received when the player collects any power ups that enemies drop and for completing a stage. When the player completes all six of the stages, defeating the six Robot Masters, the final seventh stage will appear in the center of the menu for stage selecting. In this stage, the player will traverse the robot factory of Dr Wily and will be a chain of stages that will be linked together, having four total. There will also be a new boss in every one of the four stages. All six of the previous bosses will need to be defeated again in an order predetermined before proceeding to the final fight with Dr Wily.
UPC: 0-13388-11007-0
Platform: NES
Players: 1
Condition: Used
Genre: Platformer
Region: NTSC (North America)
Rating: Everyone 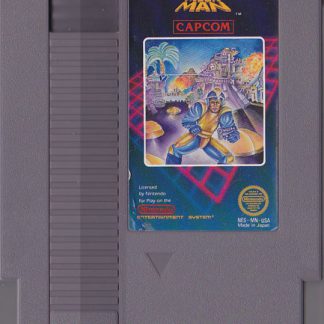