Dance Aerobics NES Game Cartridge
Dance Aerobics was released for the NES in 1989. It was developed by Human Entertainment and published by Nintendo. The game was Bandai’s third Family Trainer series, being designed for the use of the NES’ dance mat, also the Power Pad. It made it similar to other rhythm games, a genre later exploding into mainstream gaming in the late 1990s.
The game features three different modes. In the Normal Mode, a player starts with four aerobic classes they can choose from and playing through those classes will unlock another four. The player will need to follow the instructor’s motions by using the dance mat and stepping on buttons that are correct as the music plays. Some of the more advanced levels will have the player to use their hands and in other modes the use of hands will be required. The score will start at 100 and will decrease by ten with every mistake. It will increase when routines are completed correctly. When the point counter hits zero, the player will fail the song. The game will begin with the levels being simple, but when the player keeps passing levels, newer more difficult songs will be unlocked and difficulty will increase.
In the mode Pad Antics, three games will be available. In the game Tune Up, the two central buttons on the NES Power Pad will be deactivated so the player can stand on them. The ten pads the player is surrounded by will be assigned different music notes. The player will be able to compose their own melody with free style when they step on the specific pad and create the tones they wish to play. In the mode Mat Melodies, the player will stand on top of the two center pads and a short song will be played. The player will then need to repeat the song back identically by stepping on the correct pads, making sure to keep the exact order. In the game Ditto, music will be played and will tell the player to use either a foot or hand to hit the correct pad, like the game Twister.
In the Aerobics Mode, Normal Mode’s first four songs will be available, with the scoring being the same except for when the counter hits zero, the music will continue and the instructor will continue with the player being able to still attempt mimicking the moves the instructor makes. There will be no progressing levels in this mode and performing well does not unlock new content.
UPC: 0-45396-63043-0
Platform: NES
Players: 1
Condition: Used
Genre: Simulation
Region: NTSC (North America)
Rating: Everyone 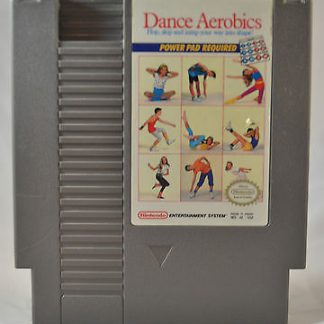