Dig Dug 2 NES Game Cartridge
Dig Dug II was released for the NES in 1989. It was originally an arcade game released in 1985 in Japan. The game was developed by Namco and published by Bandai. It is the sequel to the original Dig Dug. The hardware is runs on Namco’s Super Pac-Man and the video system is like the game Mappy. The game will take place on some island, unlike the original Dig Dug, that has a view overhead. The goal will be to destroy all enemies during the round. There will be two different enemy types. Pookas, which are red and round monsters wearing goggles, will only have power to kill the player by touching them. The Fygars, which are dragons, will have enough power to kill the player by either touching them or by breathing fire on them horizontally.
The player will take control of Taizo Hori and will have two weapons. The pump is back from the original game and inflates the enemy until they blow up. The new weapon is the jackhammer the player can use on fault lines to create faults on the game’s map. If a fault’s ends both reach water, the ground that surrounds them sinks into an ocean and kills all the creatures, including Taizo. the points that are earned will depend on the amount of enemies that get killed on the sinking ground. A vegetable will show up somewhere on the remaining island parts when three land pieces are cut off of an island. The player can eat the vegetable for bonus points. After round 31, all rounds will become identical to rounds 1 through 16. When 3 or less enemies are left on an island on the later rounds, they will try heading for the island’s edge to jump in the water to kill themselves, causing the player to lose the points.
The NES game was the only version for homes. As a side note, if an arcade operator set the DIP switch for round select on, a player would have an option of beginning at round 1 with rounds 2 through 15 being unselectable.
UPC: 0-15500-18368-9
Platform: NES
Players: 1-2
Condition: Used
Genre: Action and Adventure
Region: NTSC (North America)
Rating: Everyone 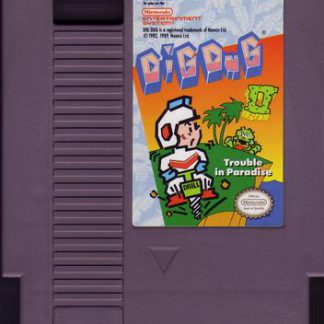