Dash Galaxy NES Game Cartridge
Dash Galaxy was released for the NES in 1990. It was developed by Beam Software and published by Data East. The player will take control of the space scout Dash Galaxy who was captured by a very hostile civilization. The objective is trying to make it through maze rooms and get back to the ship safely. The player will need to traverse each room and try to collect all objects possible to find. Keys will need to be collected so the player can get to the higher floors. Oxygen will be limited, and aliens will deplete the oxygen faster if touched. The weapons available to use are remote detonators and bombs with limited supply. Keys or bombs will occasionally be found that are used for reaching rooms that were previously inaccessible.
The game will be played from two different views. The first view is while inside the elevator shaft, which will be in a top down perspective. The second will be a side scrolling view while inside a room. Some of the levels will contain a hidden room that has bonuses or an express elevator that will get the player to their destination quicker. There is also a possibility that the player will be taken back some levels when using the express elevator.
UPC: 0-13252-00216-6
Platform: NES
Players: 1
Condition: Used
Genre: Action and Adventure
Region: NTSC (North America)
Rating: Everyone 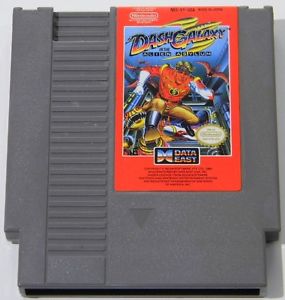