Where in Time is Carmen Sandiego NES

Where in Time is Carmen Sandiego NES game Cartridge
Where in Time is Carmen Sandiego was released for the NES in 1991. It was developed by Broderbund and published by Konami. The player will be traveling through time trying to collect a warrant and clue that is necessary for capturing Carmen Sandiego or a henchman. The objective is tracking Carmen Sandiego’s villains through time and arresting them, eventually arresting Carmen herself. This game was the first in its series that established that the ACME Headquarters was located in San Francisco.
Along with teaching players about both history and geography, it also provided practice on research books and using them. The New American Desk Encyclopedia came with this game to assist the player. The events, inventions, and people that the game features will hail from 400 AD all the way to the 1950s. The locations featured in the game are USA, Spain, Russia, Peru, Mexico, Japan, Italy, India, Holland, France, England, and China. It also came with an instruction manual that was 28 pages long. The NES version included a small encyclopedia that was paperback for free. The game is also playable in five languages that include English, Spanish, German, Italian, and French.
Like World, the player will take control of a secret agent that works for Acme Detective Agency. Research books will be needed for cracking clues that are given to the player where the thief went. The player will also try to decode interests or physical attributes of the thief based on the other clues. Both objectives will need to be accomplished to be able to receive a warrant for arrest, allowing the player to identify the thief at the case’s end. The Chronoskimmer will be used to travel through space and time. There will be a time limit during gameplay, and each action a player takes will use some time. The player will need to solve a case within the allowed time to have success.
The player will begin the game as a normal Time Cadet and is able to be promoted to a Time Patroller, then a Time Investigator, then a Time Inspector, then a Time Detective, then an Ace Time Detective, and then a Super Time Sleuth. The movements of the criminals will need to be tracked, then figure out where they are headed, get the warrant for their arrest, and send a Robot to find the thief and arrest them. The player will find the hideout when they follow a trail that is throughout the time stream. They will then ask people around for clues. Each clue that is given at any location will give the player hints for the next place to go.
Next, the player will click on one of four travel options that fits the current clue, and will then be sent to that location to retrieve another clue. If an agent from VILE is seen when arriving, this will mean the location was chosen correctly. Clues about the thief’s hobbies/likes and their physical appearance will also be given, which is what the player will use to make a warrant. The thief is able to be arrested if the correct warrant is in hand and if the player is in the right location before time is out. 80 criminals will need to be captured to complete the game.
UPC: 0-83717-11023-1
Platform: NES
Players: 1
Condition: Used
Genre: Other
Region: NTSC (North America)
Rating: Everyone 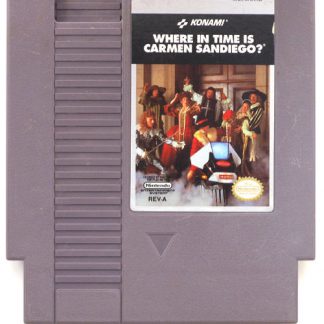 You're viewing: Where in Time is Carmen Sandiego NES $19.99
Add to cart