Fester’s Quest NES Game Cartridge
Fester’s Quest was released in North America for the NES in 1989 and in Europe in 1990. The character used is based off of Uncle Fester from the Addams Family. The story begins with Fester moon-bathing one night, and sees aliens come down from space and invades the city. He then decides to take it upon himself to rescue the city.
The game’s engine is used from another NES game Blaster Master. The player travels through the city’s sewers to get to areas that cannot be reached when above ground due to obstacles, breaks in the road, etc. He is equipped with a gun that can be upgraded with power ups located throughout the city. Fester will also run into the other Addams Family members who give him different items and weapons to help him on his quest. When entering certain buildings, it goes into a first person type view like a dungeon crawler. There is an Alien boss in five of the buildings. Once one is defeated, Fester will receive a special puzzle piece, a UFO picture, and will restock all items. You will not be able to backtrack once you have defeated an alien boss. When the player defeats all five bosses, you will board the UFO to defeat one final boss to stop the invasion.
UPC: 0-20763-11007-5
Platform: NES
Players: 1
Condition: Used
Genre: Adventure, Run and Gun
Region: NTSC (North America)
Rating: Everyone 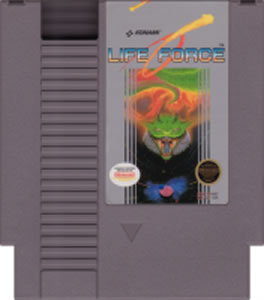