Gyruss NES Game Cartridge
Gyruss was released for the NES in 1989. It was developed by Konami and published by Ultra Games. Gameplay is similar to Galaga, except it is in &nbsp;a 3D perspective, having the player’s ship face into the game screen and is able to maneuver around a perimeter of the implicit circle. A scrolling star field of the earlier space shooters are arranged to be able to fit into a 3D perspective. It had stars that came into the screens’s center view and were flying outward. This gave an impression of a spaceship moving through outer space. Gyruss was the second game and last that Yoshiki Okamoto had designed after designing Time Pilot for Konami. There were financial disputes, with Okamoto being fired after Gyruss released. He then joined Capcom, eventually writing 1942 and the very first Street Fighter.
The player starts the game Three Warps Until Neptune instead of Two Warps like in the arcade. When completing a level, the player will become a warp closer toward a planet. Every time the player reaches a new planet, their ship will be seen flying towards the planet, with a bonus round coming into play. This bonus round can be used to gain more power ups and bonus points by shooting enemy ships. When reaching Neptune, the player will then be three warps away from Pluto. They will then progress through Pluto, then Uranus, then Saturn, then Jupiter, then Mars, then Earth, then Venus, then Mercury, then the Sun, with three warps upon reaching every planet. The first stage and each tenth stage thereafter will not have enemies fire at the player upon entering the game screen.
Most of the enemies in the game will be spaceships, which will need to be destroyed for the player to finish a level. In the NES version, there will be 39 looping stages instead of the 24 in the arcade version. The enemies will appear from the screen’s center or from an edge, moving in a swirling pattern. They will shoot at the player or run into them to destroy their ship. They will hover around the screen’s center when they complete their deploy pattern and will sometimes fly outwards to try shooting the player. If the player does not destroy the enemy, they will eventually fly away one at a time. Other enemy types include satellites, laser generators, and asteroids. They will appear intermittently, disappearing soon after if they are not destroyed. The NES game will have extra enemies, including a boss fight when reaching every planet.
Satellites will be in groups of three in the front after ordinary enemies finish their deployment. They will move in circles, trying to shoot the player. If the player’s weapon is the basic one when satellites show up, the middle satellite will look like a sun object. If the player destroys it, they will receive a stronger weapon. If the stronger weapon was already obtained, all the satellites will be identical. In the NES game, the satellites will provide smart bombs, extra lives, and extra phazers on top of already providing bonus points and double guns. Asteroids will fly to the outside form the screen’s center during regular intervals, always flying to the right or left of the ship. As long as the player’s spaceship never moves, it will not be hit with any asteroids. The player cannot destroy them, but points will be given when shooting them. The laser generators will sometimes fly to the outside from the screen’s center. These generator segments will have two generators and a laser between &nbsp;them. When the player destroys either generator, it will deactivate the beam. The player will be destroyed if &nbsp;they contact the beam or generator.
The NES game actually has a definite ending, having a short text how the Universe was at peace. The Konami code is also available for use. At the game’s title screen, the player would enter the code, but this time it needed to be reversed when entered, being A, B, A, B, right, left, right, left, down, down, up, up.
UPC: 0-83717-12005-6
Platform: NES
Players: 1-2
Condition: Used
Genre: Shooter
Region: NTSC (North America)
Rating: Everyone 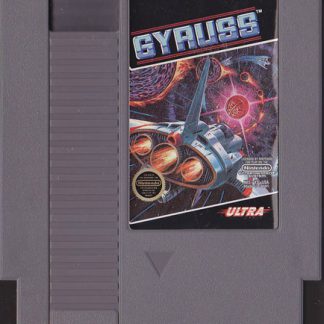