Palamedes NES Game Cartridge
Palamedes was released for the NES in 1990. It was developed by Natsume and developed by Hot-B. The game will have three game modes. The first is the standard one player mode that will require a player to destroy lines that have a set amount so they can progress to the game’s next level. The tournament mode will have a player duel some computer opponents. Then there is a mode for two players.
The main goal of the game is trying to clear a screen that dice are filling up one in line formations. The player will control a person that will be situated close to the screen’s bottom. They can move the small person right and left. The number shown on the die that the person is currently holding will be able to be changed by pressing B on the controller. Pressing A on the controller will shoot the die upwards. If a die hits another die with a number that matches, the die that was targeted will disappear from gameplay and will be added to the column at the screen’s bottom. When the player presses down when they line up a minimum of three dice that show the exact same number or numbers that are consecutive in the row at the bottom, it will destroy a maximum of five lines simultaneously.
UPC: 0-93455-10005-0
Platform: NES
Players: 1-2
Condition: Used
Genre: Puzzle and Brain
Region: NTSC (North America)
Rating: Everyone 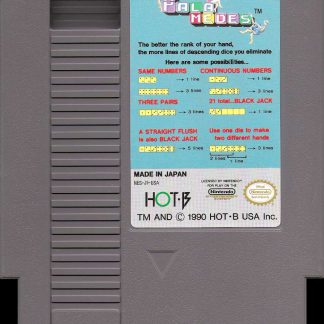