RoboCop NES Game Cartridge
Robocop was released for the NES in 1989. Data East published this version and Sakata SAS Co., Ltd developed it. The game has elements from the Robocop movie to an extent, involving having to kill generic criminal people and bosses, which include the ED-209. Due to popularity, the game was followed with sequels that include Robocop 2 and 3. Another popular sequel is Robocop Versus The Terminator, being released for several consoles but never for the arcade. The story is about O.C.P., a private corporation that has taken over the police force in Detroit that have been overwhelmed. To deal with the amount of crime that hit the city of Detroit, a cyborg law enforcer, Robocop, was created to clean out the city.
There are six stages in Robocop. The locations of these six stages consist of Old Detroit streets, the city hall, the warehouse, the O.C.P. headquarters, steelworks, and the board room. The player will use Robocop to kill enemies with a handgun, which is an Auto-9 that was special issued with infinite ammo, and punches. Robocop can take only a certain amount of damage before power is drained, since Robocop is not invincible. His battery will also gradually drain while moving. Damage is restored when the player finds power icons and battery power is restored when finding the battery chargers that are found in the stages. There are also two weapons that can be found, which include machine guns that has fifty bullets and a cobra gun that is really powerful.
Robocop can use four functions. The first is infrared vision which lets him find weak walls which can reveal shortcuts by punching them in. The second is punching, which will let the player know when an enemy they are facing can be defeated only with punches and no weapons are allowed. The third is a foe detector which will show how close the player is to a boss in a stage. The closer The player gets to a boss, the faster the detector will blink. The fourth is a power/energy alarm that will go off when the player’s battery power or energy is getting too low.
The game also has a bonus round that has the player do target practice between the stages. The player will need to shoot targets with limited time, trying to hit as many as possible. This well earn extra points for the total score.
UPC: 0-14381-51686-9
Platform: NES
Players: 1
Condition: Used
Genre: Action and Adventure
Region: NTSC (North America)
Rating: Everyone 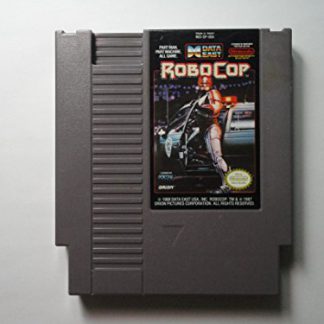