Captain Skyhawk NES Game Cartridge
Captain Skyhawk was released for the NES in 1990 and Rare was the developer. David Wise composed the music for the game. The player will take the role of a pilot that is working to stop an alien invasion. The Earth has been invaded by the aliens and they have made four bases on land, which have a design for draining the Earth’s energy and use that energy to feed their mother station. If enough energy is obtained by the mother station, it will shoot a gigantic laser to destroy Earth. The player will need to annihilate enemy bases and then destroy the mother station. A Neutron Cannon that scientists are working on is being kept top secret. The player will need to make a supply drop during some missions to help the scientists who are working underground. If an alien has a scientist, the player will need to defeat the base where the alien is and bring him to a safe place.
The gameplay is a lot like the game Zaxxon, a Sega classic. It features scrolling from top to bottom isometric graphics overhead. It also includes a 3D terrain that is simulated, mimicking the looks of the flight simulation games that were available during that time for the PC. The player controls the plane with the pilot and F-14VTS is his code name. The name is fictitious of the name F-14. The player will need to dodge mountains while destroying the aliens. Every one of the main levels in the game has the isometric plane layout. When a boss from a stage is defeated or when the packages have been delivered, the player will move on to the back facing 2D layout where you will need to defeat alien ships to acquire credits that are used at the space station for buying weapons at the end of levels. The final station is the mother-ship.
There are nine stages in Captain Skyhawk. Stages 1-7 all include three objectives, while stage 8 has two objectives and stage 9 only having one objective. All stages have several routes to take, with some allowing the player to skip over large groups of hostiles. Objectives will vary across the stages, and &nbsp;they include destroying an alien base, dropping supplies, saving a scientist, aerial battles, and docking at a station. The game also has four &nbsp;weapons, which are a cannon, intercept missiles, air to ground missiles, and Hawk bombs. The only weapon with infinite ammo is the cannon and the other &nbsp;weapons will need to be bought at a space station between stages with credits. More cannons can be bought to allow more rapid firing.
UPC: 0-32244-04092-4
Platform: NES
Players: 1
Condition: Used
Genre: Shooter
Region: NTSC (North America)
Rating: Everyone 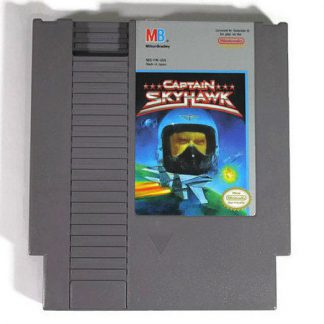