Simpsons Bart vs The Space Mutants NES Game Cartridge
The Simpsons: Bart vs the Space Mutants was released for the NES in 1991. It was the Simpson’s first game based on the show. The player will control Bart Simpson, going through five stages while trying to foil the plans the aliens had to conquer the world. Bart is the only person who knows about the plan, needing to stop them from getting what they need to create the ultimate weapon. He will have x-ray sunglasses that will let him see any aliens that are human form. Bart will need to destroy or collect a certain amount of those items. The first level has purple objects, the second level has hats, the third level has balloons, the fourth has exit signs, and the fifth has nuclear rods. If the player loses a life, Bart will yell Eat my Shorts. Bart will also try convincing his family about aliens invading the planet and get them to help during levels.
For the player to get some items and progress in the game, equipment will need to be used like cherry bombs and rockets, which the player can guy with coins from aliens after killing them. Bart will be controlled on foot or with a skateboard. The defeat aliens that are disguised in human form, the player will need to jump onto their heads. The difficulty will increase with every level completed, with a boss in levels one through four. The levels will be familiar to The Simpsons fans, with some of the humor also appearing in game. An example is during level one, Bart can prank call Moe the bartender and have him run outside, allowing the player to spray paint Moe’s purple apron red. The apron is one of the items the aliens will need, so spray painting it will cause them to not want it. Minigames are also included during gameplay.
UPC: 0-21481-10503-9
Platform: NES
Players: 1
Condition: Used
Genre: Platformer
Region: NTSC (North America)
Rating: Everyone 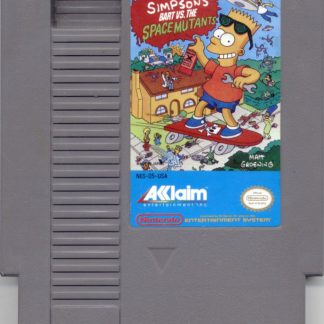 You're viewing: Simpsons Bart vs The Space Mutants NES $19.99
Add to cart