Time Lord NES Game Cartridge
Time Lord was released for the NES in 1990. Rare developed the game and Milton Bradley published it. The game takes place in 2999, and aliens that are from planet Drakkon have put Earth under siege. The aliens are using technology to time travel, sending armies to 4 different time periods in the human history. Their intentions were to alter history, making humankind easier for conquering during the present. The player will take control of a Time Lord, having until the 1st of January, 3000 to destroy the alien enemies back in time. If the player fails, the time machine will self destruct, and they will too along with it.
The player start inside the MB Time Travel Research Centre. They will progress through 4 stages that will be based on time periods during the history of humans. These time periods are Medieval England during 1250 AD, Western part of the United Sates during 1860 AD, the Caribbean during 1650 AD, and France during 1943 AD. When the player destroys the forces from Drakkon, they will return to their time and battle the King of Drakkon.
The game will feature oblique graphics that will simulate a 3D terrain. The player will be able to punch, jump, and use weapons during the time periods like guns and swords. To advance to another level, a player will need to obtain five gold orbs that will power their time machine. During the 4 stages, four of five of the orbs will be scattered around every level, and the fifth will be given to the player when they defeat the level’s Drakkon Lord.
The 3000 year deadline will be in effect during the game. One day for the present time will be transpired into six seconds, which means the player will have 36 minutes, 30 seconds of actual gameplay time for finishing the game. If not completed within this amount of time, the game will be lost. This time limit will also remain in effect when the player returns to their present time. There will be no continues for the player, but extra lives can be obtained. The weapons will depend on the period of time the player is currently in. Weapons will include laser weaponry, grenades, firearms, throwing knives, and swords. Every level will be started unarmed, but the weapons can be acquired when a gift wrapped package is collected.
UPC: 0-32244-04093-1
Platform: NES
Players: 1
Condition: Used
Genre: Platformer
Region: NTSC (North America)
Rating: Everyone 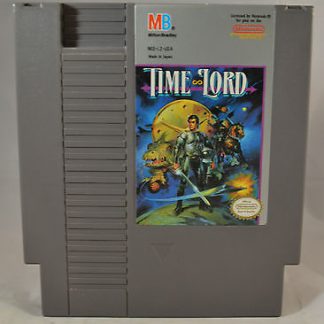