View cart “Trog NES” has been added to your cart.

Trog NES Game Cartridge
Trog was released for the NES in 1991. It was developed by Visual Concepts and published by Acclaim. It was originally an arcade game that was released in 1990. The game will feature claymation graphics that was advertised by Midway as Playmation. The creation of the claymation graphics would comprise a huge portion of development costs for the game.The game originally involved controlling dinosaurs indirectly by using bones to lead them around. The early versions of Trog tested poorly, therefore the gameplay would be tweaked to have it resemble more like Pac-Man. The player will take the role of Bloop or Spike inside of Og, which is the home of the Trog, cavemen who has one eye.
The player will need to pick up every colored egg that is lying around the game map. The Trog cavemen will wander around the map and attempt to eat the eggs. Unlike the game’s influential predecessor, which was Pac-Man, the dinosaurs are able to attack any time using a punch that will not require a power up. the power ups will also spawn randomly to help the player complete a level. These will include some red flowers increasing a player’s speed, some ice cubes freezing all the Trogs on screen, and pineapples that will turn the player into an adult T-Rex which can eat their enemies temporarily. These are very similar to the power pellets in Pac-Man, except the pineapples will randomly occur. There is also a firebrand that will give the player the ability to breath fire temporarily.
The game’s multiplayer mode will have two dinosaurs on the screen at once competing to collect all of their eggs that are colored the same first. Players are able to protect or attack each other, although getting power ups will automatically hurt anything that is in their path regardless. Many of the stages will have no walls, which will have characters able to walk off an edge of the islands that are grid like, plunging themselves into a sea if they are not careful. Trogs will be subject to the hazards themselves like a player is, with them being able to get taken out with their own pits, fire, and wheels to a comic effect. Trogs are able to be punched out with one hit to their head on the side if they are approaching the screen’s edge, which will have them fall in the sea. This will award the player bonus points.
The game will have three difficulties, which are Easy, then Advanced, then Expert. The Advanced difficulty will reward the player a 200,000 point level bonus with the Expert difficulty rewarding the player with a 400,000 point level bonus. When the levels are progressing, the cavemen will become smarter, inventing newer ways to get the player captured. They will eventually create wheels and fire pits to flatten and burn, respectively, the player’s character. They will also get springs to bounce around the game screen. There will be transportation chambers and catapults in the later stages the player can use to help evade those attacks, but they will also be usable by Trogs, which will result in tactical options for gameplay. The game will have 50 stages, and completing all of them will win the game.
UPC: 0-21481-10402-5
Platform: NES
Players: 1-2
Condition: Used
Genre: Puzzle and Brain
Region: NTSC (North America)
Rating: Everyone 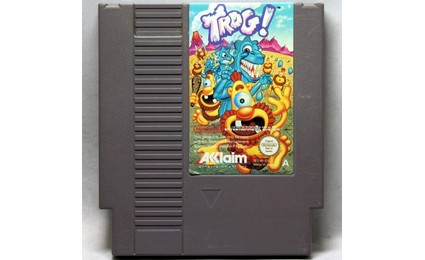