Arkanoid Nintendo SNES Game Cartridge
Arkanoid: Doh It Again was released for the SNES in 1997. It was developed by Taito Corporation and published by Nintendo. The game is the sequel to the original arcade game of Arkanoid and will pick up five years later from the first Arkanoid game. It starts with Vaus destroying DOH with the energy ball in a flashback. In present day, Commander Therle, who is presumed to be the captain of the ship, wrote an entry in a log that stated the search to find another home is still going on and the goal to locate one remains elusive. Therle also stated DOH is waiting and watching.
When starting the game, the player will continue on 11th stardawn. The sensors of Arkanoid, the starship, pick up a new planet in the Terra Class. Vaus is then dispatched to surveys for colonization. However, DOH is surrounding the new planet. the gameplay will then start.
The player will take control of the ship using a standard SNES controller or an SNES Mouse. The rounds will be completed when all silver and color blocks on the game screen are eliminated. The enemies will enter from doors located at the play area’s top. Every 10 rounds that are completed, there will be a boss the player will need to fight. Some blocks will have power ups the player will need to catch with the paddle they are controlling. There are 99 levels total to complete, a mode for editing where the player is able to create levels and power ups of their own, and is two players.
UPC: 0-45496-83063-2
Platform: SNES
Players: 1-2
Condition: Used
Genre: Other
Region: NTSC (North America)
Rating: Everyone 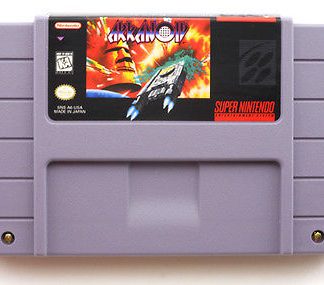