Lunar Pool NES Game Cartridge
Lunar pool was released for the NES in 1987. It was developed by Compile and published by FCI. The game is a pool simulator with a space theme mixed with miniature golf aspects. The goal is trying to knock every ball into the pockets using the cue ball. There will be 60 levels and 32 different tables available and the table friction will be adjustable.
The game will be played on boards with different shapes, where the player will need to shoot a cue ball to hit the other balls that are colored into pockets. If a player does not pocket a colored ball within three turns in a row, the player will then lose a life. Also if the player pockets their cue ball, it will also take a life. If the player ends up pocketing every colored ball consecutively during a level without failing, they will receive a remark saying Perfect. The player will also receive bonus points added to their score. The game can be played with one player against a computer or against a second player. While playing against a computer or second player, both will take turns at shooting the table’s cue ball. Once a player does not hit at least a single colored ball into one of the pockets, or hits their cue ball into one of the pockets, the turn will switch to the other player.
UPC: 0-22909-10001-8
Platform: NES
Players: 1-2
Condition: Used
Genre: Sports
Region: NTSC (North America)
Rating: Everyone 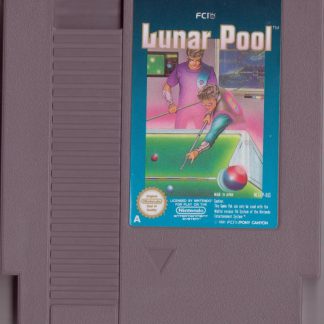