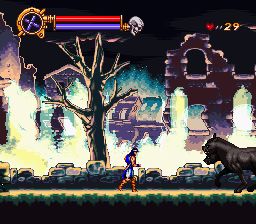 It was a crying shame when Castlevania: Rondo of Blood was passed over for US release.  The TG-16 had floundered in North America but still everyone hoped that the series high profile would afford it a bit of leeway.  We all should have known better: if Street Fighter Championship Edition wasn’t brought over no way in hell was Castlevania going to avoid the same fate.  The sting of being denied the game’s greatness was alleviated somewhat 2 years later when Konami created Dracula X for the SNES.

Castlevania: Dracula x was released worldwide in 1995.  Dracula has risen again and captured Richter’s girlfriend and her little sister Maria.  The story is identical to Rondo of Blood, more or less.  There is some confusion as to whether the game is intended to be a port of Rondo of Blood or a loose sequel based on the same events.  Regardless the game comes across as a truncated version of that game’s events.

You travel across 7 levels on your way to Dracula’s castle.  If you’ve played Rondo of Blood this plays identically.  You have 6 sub weapons and the use of item crash for increased power.   The back flip is still just as useless here as it was then.  Something that doesn’t get enough attention but is a god send is the ability to avoid being knocked back when hit by crouching.  Trust me, when you fight Dracula you’ll thank the lord for it.  While the general gameplay is the same the elements that were needlessly removed are what make this game inferior.

Although it doesn’t share any of its level designs with Rondo of Blood some are loosely based on the original just not as strong, coming across as very dull.  For example, the ghost ship from Rondo of Blood is replaced by a level that takes inspiration from Atlantis.  The alternate stages from Rondo of Blood have been reduced to just 2 producing a much shorter quest.   Although you can still rescue Maria and Annette, Maria is not playable, which is a huge blow to the game’s longevity.  The only reason to save them is for a slightly different ending.  What creates some of the disappointment is that this is coming 4 years after the seminal Castlevania IV, and the loss of many of that game’s innovations flat out sucks.  The dexterity given to the main character in that game should have become standard but sadly the designers went a bit too retro in terms of the game’s feel.

Pretty at times but ultimately does not reach the heights of Rondo of Blood.

Going from CD to cartridge resulted in serious surgery to the game’s graphics.  Rondo of Blood had fantastic set pieces and artwork; you won’t find much of that here.  Despite being on a more powerful console the presentation was designed almost with the TG-16’s limitations in mind.  Backgrounds are flat and dreary in color and look.  Of course the cut scenes were also put on the chopping block.   Coming off of Castlevania IV and Bloodlines this was a tremendous step backward.  What doesn’t disappoint is the soundtrack, with excellent renditions of the original CD soundtrack.  Many are a pretty close approximation and I actually prefer some of the arrangements here.  Blasphemous I know.

Even with its faults the game is still fun.  It’s Castlevania, short of the Gameboy games almost all of them are excellent.  It’s when you compare it to past games in the series that it does not hold up.  Even looking at this as an original game in its own right doesn’t do much.  Many of the criticisms could also be levied at Rondo of Blood but there were enough unique elements that you could overlook some of its faults.  But 4 years is a long time.  Especially now that there are numerous ways to play its inspiration without breaking the bank.