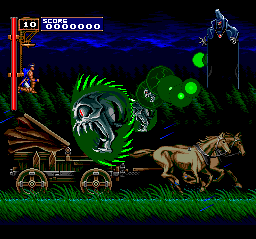 We all have them.  Objects of desire.   Those things that for whatever reason have reached such near mythical status in our minds that we feel we absolutely must have them.  In the gaming world these usually take the form of limited editions of games, imports, or unreleased games.  In this case, long time fans of the Castlevania series were left out in the cold when Rondo of Blood never left Japan.  It didn’t help that plenty of the magazines of the day bombarded us broke teenagers with many tantalizing screenshots.  Importing to sample the game’s greatness for years would run you in the hundreds of dollars leaving that out as an option.   With so few having played it its status as one of the best games in the series became legendary.  But does it live up to the hype?

Castlevania: Rondo of Blood was released in 1993 for the PC Engine CD in Japan.  Considering the console’s less than stellar performance in the US it came as no surprise that it was not released for English speaking audiences.  Set during the tail end of the 18th century, you star as possibly the coolest Belmont in the franchise, Richter.  Richter’s girlfriend Annette and her younger sister Maria have been kidnapped by Dracula.  The chase is on as you work your way to Dracula’s castle to settle the score.

This is very much a perfect synthesis of past games in the series while also bringing in elements that would later be used in Symphony of the Night.  Like the original and Castlevania 3 you work your way through the 9 levels and defeat a boss to move on.  Your six sub-weapons are complimented by the item crash ability that would become a staple of the series.  You also possess the ability to back flip although I never really found a good use for it.  It looks cool though.  Sounds like a typical game in the series but that’s where the similarities end.

In a nod to Castlevania 3 there are 4 alternate stages, accessible by finding them during the levels.  In addition to these some levels possess alternate routes that lead to different boss encounters.  The time limit has been removed allowing you all the time in the world to explore the levels for secrets.  Aside from the alternate levels, you can rescue 4 maidens in addition to Annette and Maria.  These aren’t just fluff; finding them influences the ending and bosses you fight and as an added bonus Maria becomes playable once rescued.  Unlike Richter she does not crack a whip, instead attacking with doves and rather than the standard axe, holy water, boomerang, etc. sub-weapons summons animal familiars.  You wouldn’t think of it as she is only a 12 year old girl but using Maria is game breaking as her attacks are massively overpowered.  For those that want to play the game as straightforward as possible you can; anyone seeking added depth has a wealth of content to discover, blending the best elements of traditional Castlevania with some elements from Simon’s Quest.

Over the years much ado was made of the PC Engine/Turbo Grafx-16’s status as a16-bit powerhouse.  This game lays all those arguments to rest.  This is one of the most beautiful games of that era, with hardware defying art and sprite work on display.  No fancy special effects or special chips, just skilled 2d artists given a large canvas with which to ply their trade..  The Turbografx-16 was known for lacking the ability to do parallax scrolling in hardware but that weakness does not show with scrolling 4 or 5 layers deep at times.  A significant number of new enemies were created for this game with a  large volume of the enemies recycled for numerous later games, a testament to the game’s craftsmanship.

The CD soundtrack has an even mix of new tunes and remixes, all masterfully crafted.  This or Symphony of the Night, I can’t decide which has the better soundtrack.  While Dracula X does an admirable job mimicking this version’s music nothing can beat the original.  The CD sound does the game’s compositions justice and any fan of video game music in for a treat.

Luckily anyone who wants to partake in this game’s greatness is no longer forced to pay upwards of $1-200 dollars as it has been re-released on a variety of platforms and downloadable services.   The Wii virtual console version is only $10 and is the Japanese release, untranslated and untarnished.  A port was included as part of the PSP Dracula X Chronicles and as an added bonus translated into English along with a 2.5d remake that although decent does not touch its source material.  However that version has a few graphical issues that blemish the overall product.  Regardless of the version you play you are in for one of the greatest action games of all time.