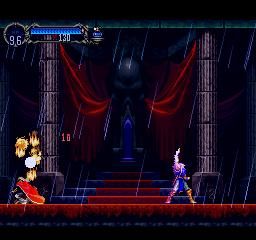 It isn’t very often that a game comes along that is so great it transcends genre.  Super Metroid is considered one of the greatest games of all time and is deserving of that status.  Not too many games follow that same gameplay structure, which is a shame but I imagine its a nightmare to design and balance.   When Castlevania was originally announced for the PlayStation few could possibly have imagined that not only would it be mentioned in the same breath as that classic but would become one of the greatest games in the PlayStation library.  This remains the absolute peak of the franchise.

A direct sequel to Rondo of Blood, the events of the story take place 4 years later.  Richter Belmont has disappeared, with a now grown up Maria searching for him in Dracula’s newly emerged Castle.  Alucard also awakens from his eternal rest to traverse Castle Dracula and defeat his father once and for all.  Like Metroid and to some extent Simon’s Curse you have free reign to go wherever you want as you accrue a massive inventory of weapons, armor, and relics to lay Dracula to rest.

Castlevania: Symphony of the Night was released in 1997 worldwide for the PlayStation and later ported (shoddily) to the Saturn.  If you can believe it there was some concern whether SCEA would allow it’s release in the US as they were against 2d games because they didn’t show off the system’s prowess.  At a time when everyone made a mad rush to 3d despite their lack of experience using it Konami should be applauded for sticking to the series 2d roots.

Let’s start with Alucard.  Erase any memories of past Castlevania protagonists.  Alucard is a joy to control, as nimble as Mario but as tough as Mega man.  You have a large repertoire of moves right from the start which expands considerably over the course of the game as you gain more powers from the relics you find.  The developers were so confident in the controls they even added Street Fighter style button combinations to use Magic spells, although these are never necessary.  Beyond the controls the animation is breathtaking: you’ll stop and marvel at what you are seeing many times I can assure you.  Using Alucard as the main character rather than a Belmont is an interesting choice as his motivations for wanting to eliminate Dracula while similar are for different reasons than your typical Belmont.

You can explore nearly any area of Dracula’s castle provided you have the necessary items.  Progress is non linear since you aren’t given any direction; you simply follow whatever path is in front of you until you see an opportunity to deviate.  Weapons and armor are in abundance creating a loot whore’s dream.  Becoming attached to a particular piece of equipment is never an option as you’ll more than likely replace it soon enough.  All of these also have a visible change on your appearance.  The relics found in secret areas or after defeating bosses expand your set of powers or power up existing ones allowing you to delve deeper into the castle.  These are ultimately necessary to reach inaccessible areas of the castle and the castle is so expansive you’ll have to make mental notes to come back to particular areas later.

That aspect has always been one of the greatest strengths of the Metroidvania formula: it’s always worth it to go back as the rewards are suitable for the lengths necessary to seek them out.  Killing enemies will cause you to level up and make you a virtual powerhouse in short order as your stats increase.   Despite all of these new features the game never loses sight of its roots, with candles, hearts, and an even larger arsenal of sub weapons at your disposal.  The game has so many options available that it can be overwhelming but at the same time accommodates nearly every play style.

The Castlevania games have built up a reputation for legendary boss battles and these are some of the most classic for the franchise.  Familiar faces make a return with makeovers such as Death, Medusa, or little known enemies such as Slogra.  As great as those fights are it’s the legion of new bosses that will make your hands tremble with excitement.  Granfaloon, a mass of thousands of dead bodies attached to a core shows off the console’s processing power as the bodies drop by the dozens (or hundreds) while you cleave your way to its core with not a hint of slowdown.  Beelzebub is a rotting corpse on the verge of collapse that summons insects to keep you away from picking his body apart.  Galamoth is now legendary because of the drastic jump in difficulty compared to the rest of the game and is so large he takes up 3 screens.  Its amazing that Konami kept upping the ante on themselves in this regard however the lucky gamers that play this are the ones who benefit.

The pictures speak for themselves.

The graphics are some of the finest 2d sprite art created.  That’s a high bar but there is no doubt in my mind that it is true.  All of the enemies exhibit the same level of detail as Alucard, from the pathetic skeletons to the massive bosses.  What made it so striking was the common belief that the PlayStation was underpowered for 2d games versus its 3d capabilities.  This put to rest any doubts that the PS One was more than capable in that regard.  It was also a bold move: 3d was considered the future, and rightly so, with every franchise receiving a 3d facelift.  You could argue that by keeping it in the realm of 2d Konami was able to draw additional attention to the game.

The soundtrack might even surpass the graphics if that is even possible.  Series composer Michiru Yamane made her full debut with a soundtrack that blends everything from techno and rock to classical music.  Remixes of previous tracks also make an appearance, with some of the best renditions of Bloody Tears and Dance of Illusions coming from this game.  The only blemishes would be the voice acting; it’s laughably bad at its attempts to be dramatic.  This could also be a symptom of the game’s questionable localization.  It isn’t that the game doesn’t make sense; the wording of many phrases is just off and sounds ridiculous.  It doesn’t ruin the game or anything; you could even say it adds to the game’s charm as many of the lines are memorable and quotable in their absurdity.

This is not only one of the greatest games in the Castlevania series it’s also one of the best games ever made.  Even if you don’t like the Metroid formula I believe you’ll still love this game.  There is a reason why this is still being ported to future consoles long after its release.