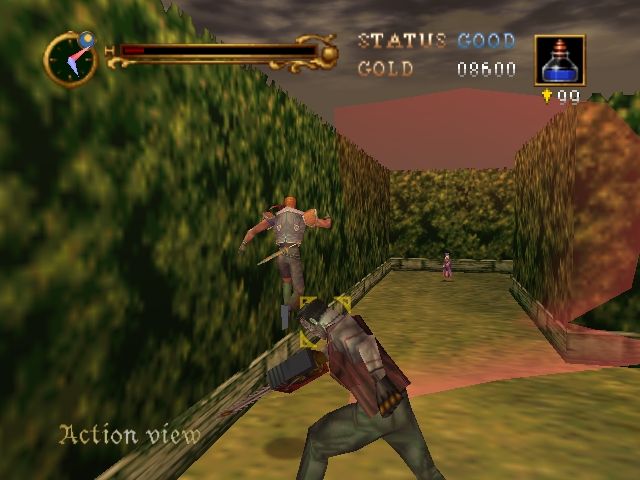 During the 32-bit era there was a disturbing trend of taking beloved franchises and slapping them in 3d, as if that were enough to instantly make them better.  Once you take into account 90% of the developers in the industry had no experience working with 3d you can see how the results were usually disastrous.  Fighting and racing games benefited the most from the move to 3d while platformers and action games would go through an extended period of growing pains to get them right.  After Symphony of the Night, all eyes were on Konami to see what they would do next with the Castlevania series.  We would quickly come to regret anticipating Castlevania 64’s release however.

Castlevania 64 was finally released in 1999 after many delays, most stemming from overly ambitious plans.  After chopping the number of playable characters in half and scaling back the game’s scope they were able to get the project back on track.  You control one of two characters, Reinhardt Shneider, heir to the Belmont clan or Carrie Fernandez, who has her own reasons for wanting to kill Dracula.  Each character plays differently and has some of their own unique levels and story events, making it worthwhile to play as both of them.

The best description of Castlevania 64 I can give is a 3d version of Simon’s Quest.  Although level based, you have free reign to explore each one to your heart’s content as you work your way to the exit.  Although there isn’t a time limit, the real time clock governs many factors in the game.  Story events occur at different times during the day, characters will ask you to meet them at specific times and locations, etc.  You can choose to wait or use Sun and Moon cards to advance the clock.  It’s never explicitly stated but finishing the game within a certain amount of days leads to multiple endings.  The day/night cycle determines how weak or strong certain enemies are and also when particular doors will open although that last bit is underdeveloped.  There is a merchant available to buy items from although you really should watch how much you spend (heh).

The games levels are one of its strongest elements with many deviations from the norm.  The hedge maze is a harrowing chase sequence as you lead Malus to safety from a chainsaw wielding Frankenstein.  You will literally shit your pants during this segment, but not always for good reasons.  The Castle Center will force you to carry Nitro with the caveat that you can’t jump.  Studying the levels and determining the best path to avoid being blown up is awesome.  At a time when most 3d action games only did the bare minimum because of their creators lack of experience these were a breath of fresh air.  Unfortunately Konami’s inexperience does rear its head in the worst way: the camera.

The camera is atrocious.  This is one of the worst cameras I’ve ever wrestled with.  Something as simple as walking in a straight line will result in the camera spazzing out in an epileptic fit.  Since the enemies spawn in random locations around you trying to get the camera to focus on whoever you are targeting is an exercise in frustration.  There is a lock-on but that usually causes the camera to wig out even more.  Later levels feature extensive platforming and in conjunction with the dreadful camera this quickly becomes a nightmare.

The controls similarly are slippery.   You move far too fast which would normally be a boon but instead causes headaches when you are trying to inch forward on a narrow ledge to properly position yourself, something that occurs frequently.  You’ll never really feel as though you are in direct control when making jumps and grabbing ledges; it’s a roll of the dice most times whether you succeed or fail. It’s a shame that the most important elements turned out so bad as the rest of the game is solid if not spectacular.  Back in 1999 we were able to overlook these problems because there wasn’t exactly much else to point to as a perfect example to follow.  Now with the 3d action genre nearly perfected this is intolerable.

If you can somehow overlook the bad camera and loose controls the game can be fun.  But in this day and age it would take the patience of a saint to do so.  Damn shame, as the music is excellent despite the console’s limitations in that department and the game is sufficiently long.  Decent for its time but does not hold up.