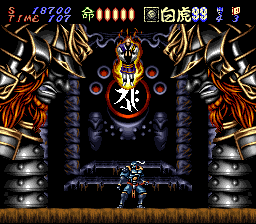 It’s funny but the SNES never had its Shinobi counterpart.  There were numerous Ninja games to be sure, such as the Ninja Warriors or Legend of the Mystical Ninja but never a straight action masterpiece on the level of Shinobi 3.  It’s a noticeable hole in the system’s library, one that Hudson Soft and Red Entertainment sought to fill with Hagane.  In the process they succeeded somewhat, creating one of the best pure action games for the system but doomed it to obscurity by only making it available through Blockbuster video stores.

At its roots Hagane owes a lot to Shinobi, not that it should be viewed as a negative.  Hagane possesses a large number of special moves, including a somersault that will propel you across short distances, a flying drop kick, and a slide attack.  There’s also a cartwheel that can help you avoid attacks and a fairly useless ground fireball attack that is hard to pull off, much less kill anything with.

The 4 primary weapons are all available from the start, with the sword and chain featuring unlimited use.  The bombs and shuriken have to be replenished but they are in ready supply so go nuts.  Each varies in power, range, and speed and the game presents many situations where switching is necessary.  The chain is the only item that sees limited use.   It’s incredibly weak and will mostly be used to grapple up to ledges.

The ancient mysticism meets futuristic technology aesthetic makes for many elaborate set pieces.  There’s an assault on a flying fortress, a cool escape from said fortress on mobile platform as it rotates around you using Mode 7, and many forced scrolling segments.  There are a ton of mini boss battles sandwiched in between the each stage and one of my favorites sees a rival ninja jump in from the distant background to summon a mechanical demon to fight.  With as many of these mini bosses in the game the developers knew they had to take it a step further for the end of level masters.  Epic in size and scope these bad asses seek to end your quest for the Holy Grail and are excellently designed.  The twin samurai statues are a mere diversion as the real target hovers around the room.  The banshee of Stage 3 soon sprouts a Medusa like tail when her fireballs aren’t enough.

It’s in these moments that Hagane is a blast.  Unfortunately the rest of the game is marred by sloppy execution.  Overall the game is viciously hard due to the volume of enemies that attack at once and the loose controls.  Enemies often attack in groups of 2-4 and all require multiple hits to kill.  The chain is useless due its lack of power and the bombs travel in an arc, usually flying right over their heads.   That leaves the sword which is powerful but has short range or the shuriken, which can drain fast dealing with the chaos.

Despite your large arsenal of moves the levels aren’t designed to take advantage of most of them, and some like the cartwheel are useless.  The somersault is featured heavily in the forced scrolling segments and presents its own problems.  Much like Revenge of Shinobi the timing necessary to activate it leaves little margin for error.  This leads to far too many cheap deaths as a result.  With continues in short supply and your extra lives being drained don’t be surprised to see the Game Over screen frequently.  That isn’t to say the game is impossible; once you’ve adapted to the hectic pace it becomes manageable.  But the lack of polish obscures the truly excellent game it could have been with a little more work.

Visually Hagane is mixed.  Many of the bosses are spectacularly detailed and the overall art direction is superb.  The game makes use of very few special effects aside from slight Mode 7 and heat haze.   The art direction definitely carries the game graphically.  But the look is very dark in tone, heavy on the dark browns, greys and blues.  In 1995 we were treated to visual spectacles like Donkey Kong Country 2, Vectorman and Super Mario World 2.  Hagane does not look like a game from that same release period and in fact wouldn’t look out of place on the PC-Engine, which the developers had spent the majority of their time working with.

Hagane is a good, borderline great game that could have been so much more with extra time in the oven.  Once you’ve adapted to its approach there’s plenty of fun to be had.  Because it was sold solely through Blockbuster video not many have played it, and since it isn’t in high demand a copy will only set you back a few bucks.  Its more than worth it in my opinion.