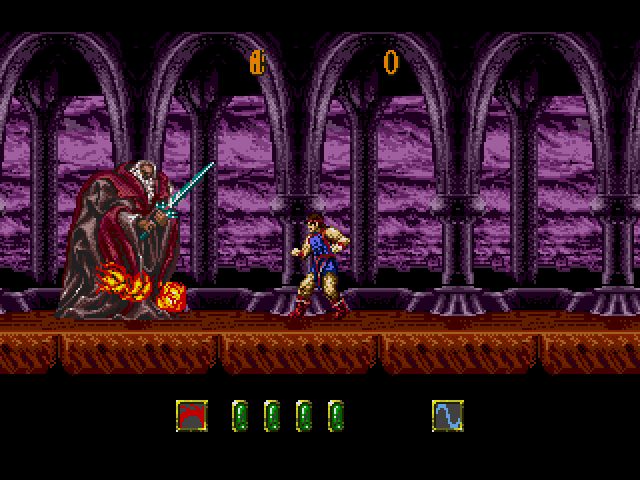 This is a classic case of don’t judge a book by its cover.  I’m not talking about the box art so much, although it does nothing to entice you into playing the game.  If you ask me it looks like a poor man’s version of the Mandarin’s rings (a reference I’m sure only comic book fans will get).  I mean the gameplay.  Jewel Master looks exceedingly generic and the first few minutes of gameplay bear that out.  But once you plumb the depths of its magic system you’ll see it for the good action game it truly is, only let down by its lackluster production values.

The land of Mythgarde enjoyed a long period of peace until the coming of the demon king Jardine.  12 elemental masters united to defeat his army and put a stop to his plans of world conquest but failed in the attempt.  With only 4 masters remaining they pooled their powers into the creation of a Holy Blade and prepared for one final battle.

I almost feel guilty wishing the gameplay system in Jewel Master were used in a different game.  For as brilliant as the system is it deserves to be accompanied by suitable graphics and level design to match.  Not to say the game is terrible but it the rest of the overall package does not rise to the level of its ring system and it suffers as a result.

There are no power-ups in Jewel Master aside from fruit to restore life.  You must rely entirely on magic to survive, of which there is plenty to go around.  You can equip 2 rings on each hand, with separate buttons for each one.  The rings correspond to the 4 elements, Earth, Wind, Water, and Fire and can be combined in any fashion you choose although opposing elements cancel each other out.  Each element has a specific attribute, such as the water rings barrier creation or the earth rings earthquake power.  That’s right rings, plural.  Each has up to 3 levels and you’ll always receive a newer upgrade after each boss battle.  There are a few that are held by blatantly obvious enemies lying around each level as well.

Taking all of this into account, combining the rings to see what effect will result is the most fun in the game.  Tallying it up there are 36 spells to play around with.  It becomes a mad scramble every time a new ring is acquired to see what new affects you can produce and the results are varied.  Not every spell is for attacking; there are an equal number of utility spells such as barriers, double jumping, and movement speed increases as well.  The first few times I played the game I was frustrated at the sad range of the default fire spell but a lucky drop of a wind ring enabled me to combine it with the water ring to create a more powerful wave spell that trivialized the initial stage of the game.  Not everyone will feel the same of course but new rings are dropped at such a frequent clip that eventually you’ll settle in to a combination you’ll like.

Although the magic system affords a large amount of freedom the level design sadly doesn’t keep up.  Each of the 5 stages is broken down into 2 or 3 parts but most of them are strictly left to right affairs.  The few times the levels open up and allow you to explore offer a tantalizing glimpse at what could have been.  The utility spells see very little use overall because of this and seem like they were included as an afterthought.  The boss battles are some of the only challenging fights that will force you to experiment with different magic; if more of the game had shown the amount of attention lavished on the bosses Jewel Master would be a better game.

But it would still need a graphical overhaul.  I don’t like to compare games from different series but in this case the comparison is apt.  Jewel Master resembles a poor man’s Actraiser.  Not so much the level “themes” such as forest and desert but their similar look.  Granted Actraiser was released on more powerful hardware but both games came out the same year and the disparity in production is apparent.  I won’t even compare the music; putting most composers up against Yuzo Koshiro at his peak simply isn’t fair.

Jewel Master is a good game in the end but had the potential to be so much more.  My gripes with its lack of production values means I would only recommend it only after you’ve exhausted the better offerings the genre has to offer on the Sega Genesis.