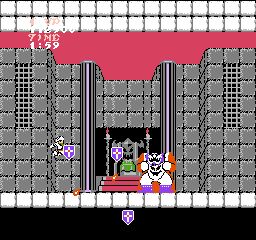 Why must you hurt us so bad Capcom?  By now everyone has least heard of or played at least one game in the Ghouls N Ghosts series.  Known for their technical excellence as well as their perfect blend of platforming with white knuckle action the series also holds another distinction: ridiculous challenge.  Every game in the franchise is a nail biting exercise in trial and error style gameplay as you make progress little by little.  However in spite of the difficulty they were at least good games underneath.  The NES port of the original arcade game holds the distinction of being one of the hardest games ever made, and not always for the right reasons.

Arthur and Princess Prin Prin are enjoying each other’s company in a cemetery of all places when their get together is interrupted by Satan, the king of the Underworld.  While I’d like to imagine they were having a picnic or some other fun activity there’s 2 facts to consider, 1. They’re in a graveyard, 2. Arthur is chilling in his boxers.  Cock blocking aside, what this means is a long, arduous journey to save the girl.

Released in 1987 for the NES Ghosts N Goblins came at an interesting point in the system’s life.  The simplistic games of the first year had long since given way to more complex adventures such as Metroid and Zelda.  While we were initially more forgiving towards a game’s faults due to most developers still finding their legs so to speak by that point gamers were beginning to develop a more critical eye about their tastes.  There’s nothing wrong with a game being overly difficult as long as the challenge is fair; it’s in this respect that Ghosts N Goblins fails.  With seemingly impossible odds stacked against you few will ever see the end or care to even try.

Aiding you on your quest are numerous weapons.  The initial lance is fairly powerful and actually more useful than most of the other secondary weapons.  Contrasting the lance is the dagger, weaker but able to be thrown in rapid succession.  In most cases the Torch is absolutely terrible; although it’s burst of flames can be useful that’s only if it hits the ground.  The rare axe travels in an arc and has the side benefit of cutting straight through enemies as well.  Lastly the Shield blocks enemy fire and is mandatory to beat the game.

At face value it sounds like a lot of firepower.  But in practice it becomes irrelevant.  Ghosts n Goblins has one goal, to put you down like a rabid dog and it does so with angelic grace.  Every level has a strict time limit, which is extended at mid-level checkpoints.  In most cases you will barely beat the clock due to a number of factors.  With his suit of armor Arthur is able to withstand two hits before death, which should be a boon but in the long run makes little difference.  Enemies flock in large numbers and constantly spawn, ensuring you don’t dawdle in one spot too long.  And worst of all they are faster than you, sometimes magnitudes faster.  The Red Arremer is the most infamous enemy in the series and in this game is an absolute nightmare.  Every single encounter with the red bastard has a 50/50 chance of ending in death.  And the game loves to throw 2-4 of them in every level, sometimes even two at once.  Conversely the end level bosses are cake in comparison which is little consolation.

Each level is split into two distinct parts and at only 6 levels Ghosts N Goblins would be a short game if not for one catch: you have to go through it twice.  Yes that’s right, that tradition started here and I’m sure most like me shut the game off when told that it was all a trap made by the Goblin King and are booted back to stage 1.   So not only do you have to do it all over again, the game is actually even harder the second time around.  You know why I did it all over again?  Because I had nothing else to do.  Fortunately for you reading this more than likely you weren’t poor like me.  Don’t do it!

While I don’t like “dumping” on one of the sacred cows of gaming there’s no possible way I can recommend Ghosts N Goblins to anyone other than masochists, in which case all I’ll say is you’ll get what you deserve.