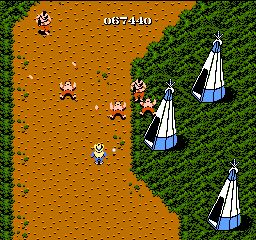 Christmas of 1988.  After a solid week of being cooped up in the house with no NES or video games for some reason that escapes me I was finally able to leave and sample my friend’s Christmas stash.  Tiger Heli?  I guess it’s alright.  Bases Loaded?  Not into sports.  Dr. Chaos?  Yeah fuck that game.  Gun Smoke?  Hell yes.  Having seen the arcade unit but never played it myself the NES port was just what the doctor ordered to save my Christmas break.

Originally released in arcades in 1985 Gun Smoke tells the story of the town of Hicksville.  As the outlaw Billy Bob the people of Hicksville hire you to rid them of the Wingate family and their army of bandits.  Gun Smoke is evocative of many a classic western, the idea of a lone stranger who strolls into town and ends up solving the people’s problems by chance.  Extremely popular in the arcade the game was ported to nearly every PC format of the time, whether they were capable of handling the game or not.  The NES port features a number of marked differences, some good, some bad, but still retains most of the original game’s flavor to please fans who wanted the same experience at home.

The first feature of note is the control scheme.  Gun Smoke is a vertically scrolling shmup with two buttons to fire, each firing diagonally to the left or right.  Pressing both at the same time allows you fire straight ahead.  It’s a concession that had to be made due to the lack of a third button and in many ways changes how you proceed through the levels.  Positioning now plays a heavier role since your fingers will get tired pressing both buttons unless you have a turbo controller.  Enemies come in big enough groups and move in varying patterns so that you can never really settle into a rhythm.  One hit equals death and it comes frequently for the less coordinated.  You can either find or buy a horse that will absorb a few hits but it’s kind of evil to use an animal as a meat shield don’t you think?

Billy Bob isn’t completely outgunned in his fight against the Wingates.  Boots can be collected for a much needed speed boost and bullets will increase the rate of fire.  The Yasichi item that Capcom was so in love with in the 80s makes a return in two forms; one for invincibility and another as a smart bomb.  The enemies killed grant money rather than a score and serves a new purpose in this version.

In the first of many changes the NES version utilizes your score for a number of purposes.  In every level there are merchants who will sell you new weapons with limited ammo but pack a serious punch.  The second merchant has a few items for sale, such as ammo, the aforementioned horse but most importantly the Wanted poster.  The wanted poster is mandatory to face each level’s boss; without it the level simply repeats endlessly.   If you’re thorough in blasting every inch of the screen it’s possible to find a Wanted poster but don’t count on it.  It becomes a juggling act saving money for the poster or upgrading your weapons.  As the levels progress the cost of the posters increase significantly, to the point where you’ll have to go through a few cycles of each stage to earn enough money to buy it.

That change goes hand in hand with another: there are only 6 levels compared to the arcade’s 10.  4 of the arcade’s colorful cast of characters were excised, not that it was necessary.  I feel the exorbitant price of the Wanted posters was done on purpose to make each level longer than necessary, a fact that does hurt the game somewhat.  The levels aren’t too long and do cover a nice swath of environments so Capcom did make some smart choices as to which bosses were kept.  The NES port is a fairly challenging game but miles away from the hair pulling arcade game thankfully.

Gun Smoke holds up amazingly well for an earlier NES effort.  It isn’t as well-known as Capcom’s other NES classics like Mega Man or their Disney games but just as good if not better than many of those releases.  With good graphics and a nice soundtrack anyone looking for vertical shooting goodness after Life Force should look no further.