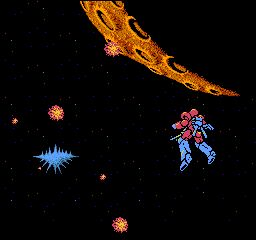 You know once upon a time I actually liked Section Z somewhat.  I was and still am a huge Metroid fan and the NES version of Section Z is eerily similar to Nintendo’s classic series.  However Nintendo realized a sprawling adventure of that size should not and in most cases could not be completed in one sitting.  Capcom did not follow that example and among a few other faults leaves Section Z a shell of the game that it could have been.

Originally released in the arcade in 1985 Section Z stars an unnamed astronaut sent to destroy a space station near Earth’s orbit.  This version of the game was broken down into 5 stages composed of 26 individual sections lettered A-Z.  I remember the arcade game due to its cumbersome controls, with one button set to shoot and the other governing the direction of fire.  Since it was an arcade game each section is of average length.  As a whole this version of the game is fairly generic as shooter, not that there’s anything wrong with that I suppose.

The NES game is a different beast altogether.  Aside from the basic premise it’s an entirely different game.  Rather than a shmup this version is more of an adventure.   There are 3 stages broken down into 20 sections for a total of 60 “levels”.  The object of each massive stage is to destroy 2 power generators guarding the boss of the entire level in order to destroy it and move on.

Large in scope but slightly lacking in execution, Section Z was a game that my family and I would pull out every so often and make bits of progress here and there until eventually months later we mustered up the fortitude to finally complete the game.  Why did it take so long?  Because there are no password saves or battery backup.  For a game of size it’s a bit much to expect anyone to have the patience to sit all the way through it, especially taking into account its maze like structure.

Nintendo realized how important it was and so they added passwords to the US Metroid.  While I am somewhat down on the game Section Z does represent a further maturation of game design as developers became more adventurous with their projects.  The simpler games like Ice Climber and Wrecking Crew were giving way to sprawling adventures that no one had attempted before.  On that front you can forgive some of Section Z’s mistakes.  But the fact that the Japanese release for the Famicom Disk System allowed you to save progress means Section Z shouldn’t have been released this way.  It’s a sticking point that does bring down the experience as a whole.

There’s a decent selection of weapons available to battle the hordes aboard the space station.  Capsules that are destroyed will drop one of 3 additional weapons, the Flash Buster (a three way shot), Megasmasher, and a Barrier.  The rare Mega Buster (now we know where the name came from, ah hah!) combines the Flash and Megasmasher, although it isn’t as great as you would expect.  At the cost of some life you can summon one of three powerful shells for different effects.

Speaking of life, character death is handled a little differently here.  There are no lives or continues, just the one life bar.  You start with 20 health which is upgraded a bit after destroying a generator.  Bullets only cause minor damage but head on collisions with enemies or getting crushed by the scenery will send you back to the beginning of the current section and costs 5 health.  So long as it never reaches zero you can keep trucking along.

The individual sections themselves are short in length, some only a few seconds at best.  They vary between fast paced obstacle courses and slower, bullet ridden battlefields.  Although each stage is massive you are generally confined to a small portion of sections at first, usually somewhere around 5-6.  Don’t let that number fool you however.  At the end of each section a transporter presents you with two choices that will teleport you to different destinations.  It becomes necessary to write down which sections each beam will warp you to in order to avoid confusion, a fact that was lost on me back in 1987.  Once that first generator is destroyed nearly all 20 sections of each stage open up and it quickly becomes a game of memorization to figure out where to go.

There is next to no guidance given as to where to go so you’ll wander around randomly and eventually stumble on the correct “path”.  While there are set destinations you have to eventually reach the order you go about doing so is up to you.  There are hidden rooms with new weapons to find and sometimes it might be worth it to take a detour to your current goal.  It’s possible (I know from experience) to wander around for hours until you stumble on the path the game loosely tried to show you.  A map or even one line mentioning which section is your next target would have gone a long way.

Section Z is very much a product of its time.  Like Castlevania and to some extent Kid Icarus it makes a number of mistakes that critics would savage the game for now but when placed in the context of the time of their release you can understand why.  The ultimate question then becomes whether they are worth revisiting in spite of those faults; in the case of Section Z I would say yes but only if you have a large chunk of time and some graph paper.