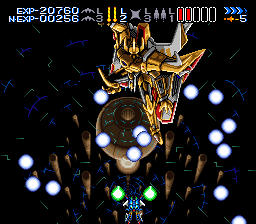 You know I miss Vic Tokai.  They were never as mainstream as Capcom, Konami, or Sunsoft but they published many quirky and otherwise excellent little gems like Clash at Demonhead and Golgo 13.  Granted the video game division was only a small part of a much larger conglomerate but their presence is missed.  One of their first SNES releases was Imperium, a shooter that came and went with little fanfare.  The question is why?

In the year 2027 a planet sized space fortress named Zektron attacks the Earth with its alien forces.  With much of the planet in ruins a small military group manages to create a lone mech suit named Imperium in order to save humanity.   The goal: to destroy Zektron and the forces occupying Earth.

I thought for sure Imperium was part of the Aleste/M.U.S.H.A series.   They both share similar mech designs and protagonists.  In looking up the Japanese version I found this wasn’t the case but did note that there are a significant number of differences between the two versions.  Some of these changes are for the better while others were unnecessary, not that they ruin the game.

Imperium’s arsenal of weapons is small in number but make up for it in power.  All 4 weapons, the standard Vulcan shot, Wave beam, the Laser, and the reverse star all have unique sensibilities.  The Wave beam covers a wide range of the screen, the laser passes through enemies and objects, and the star fires in the opposite direction you are moving.  Rather than a score counter you gain experience that levels up your weapons and makes their firepower even more distinctive.  A level 3 wave beam splits and covers a good two-thirds of the screen while the Vulcan will also fire behind you.

All of this firepower in conjunction with your life bar will get a thorough workout.  This is one of the more fast paced shooters on the SNES and the screen will fill with projectiles continuously.  Weapon switching becomes mandatory for survival as some are more suited for particular enemy types.  The enemies come from all corners, some at the drop of a dime, meaning you’ll need the reflexes of a cat to survive.   Unfortunately the game’s speed and manic craziness bog the system down and causes rampant slowdown.  When all of your weapons are at their max level the game will even slowdown during boss fights.

Speaking of the boss battles, the game’s six levels all feature monstrous mid and end level bosses.  The numerous bosses are excellently designed with unpredictable patterns.    Some of the bosses wouldn’t look out of place in an episode of Gundam which is a compliment.  Some of these bastards are surprisingly mobile despite their size and will really test your shmup skills.  Unfortunately these fights are where slowdown is most likely to occur and considering the game’s already steep challenge dying due to the game’s technical deficiency sucks.

The odds are heavily stacked against you from the onset.  Although you have a five hit life bar it gets drained quickly.  The only way to replenish life is to level up which doesn’t happen often.  Even worse, taking hits carries an even steeper penalty.  Any weapon equipped when you are hit is downgraded one level and during boss fights this is virtually impossible.  You have one life and 4 continues to beat the game and trust me, that ain’t happening in one afternoon.  There is some small incentive to try and finish the game on higher difficulty settings in the form of a longer ending but good luck with that one.

There are some notable differences between Imperium and its Japanese version, Kidou Soukou Dion.  The Wave beam was added in place of the homing laser, a change that I have mixed feelings about.   While the wave beam does cover a large amount of screen real estate it’s also the cause of a lot of the game’s slowdown.  Enemy placement is different in the two games, with some exclusive to each version.  Kidou Soukou Dion has better graphics due to the removal of a lot of the background objects that simulated the depth, leaving many of Imperium’s stages flat and uninteresting.  It’s nothing so significant that you should go seeking out Kidou Soukou Dion but is worth mentioning.

Imperium is a decent game that was overlooked at release and in some respects I understand why.   The challenge is pretty steep and there are far better shmups on the SNES, meaning only the most die hard fans of the genre need apply.