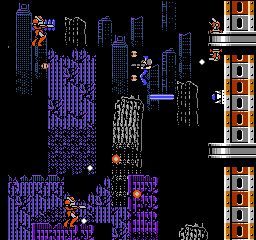 I really wonder if the developers knew what they were doing when they came up with the acronym S.C.A.T.  Sure it’s a bit juvenile to laugh at the name and what it implies but so what?  I can’t help it if it’s funny.  All jokes aside S.C.A.T (which stands for Special Cybernetic Attack Team) is another notch in Natsume’s belt of action games for the NES and saw numerous improvements for its US release.  While it never quite crosses over into classic territory it is an enjoyable shmup and much better than many of its contemporaries.

In the near future (remember all of those games that took place in 200X?  Doesn’t seem so futuristic anymore does it?) aliens have connected their base to New York City via an AstroTube.  A team of cyborg soldiers have been assembled to ascend the tube and stop the invasion.

Structurally SCAT shares many similarities with Forgotten Worlds.  Both games are 2-player coop, feature heroes that fly and both games have a floating unit or “option” if you will.  Forgotten Worlds saw release in arcades in 1988 so it could be the direct inspiration for this game.  It’s good company to be in as Forgotten Worlds is a beloved classic of the 80s and never saw an 8-bit release.

While they are similar there are some unique differences.  While there isn’t an item shop you can find 3 weapons in addition to the requisite health and speed power-ups.  The weapons cover the standard types, Wave beam, Laser, and Bomb.  It’s nothing special but the satellite orbs however are.  In S.C.A.T you are limited to firing in one direction, straight ahead.  For added firepower you are equipped with 2 orbs that can be toggled between fixed-fire and rotating.  By default they will orbit up and down and fire intermittently.  You have the choice to lock them in position in any direction which comes in handy for many of the levels.

Despite covering only 5 levels S.C.A.T does its best to give you a full gaming experience.  Each level is surprisingly long, sometimes too long.  They cover a range of terrain, such as the ruins of New York City and the ascent up the Astro Tube.  The final level is an ambitious recreation of the capital ship assault in R-Type and is very well done.  Because the levels scroll both vertically and horizontally there are plenty of opportunities to make judicious use of the satellites two modes.  Although you are equipped with a decent sized life bar S.C.A.T puts up a decent fight before going down.  You have one life and six continues and it’s entirely possible to exhaust them before reaching the end.  Overall the challenge is fair and balanced, the way it should be.

For once America got the good of the deal when it comes to localization.  The Japanese version called Final Mission was fairly generic in its presentation.  The US release follows in the footsteps of Contra and recasts the protagonists as famous movie stars, in this case Arnold Schwarzenegger and Sigourney Weaver.  Not that it made much of a difference but it is what it is.  The game was made easier, doubling the life bar and allowing you to fully control the satellites rather than the static Gradius style options they were originally.  A map showing your location was also added as well as some minor voice acting in the intro.  I likened this to Contra for a reason; the Japanese version of that game was drastically superior to what we ended up with so it’s nice to see the tables turned for a change.

If S.C.A.T were bit longer I would place it in the upper echelon of NES shmups.  As is it will have to settle for above average.  For fans of the genre or good action games in general S.C.A.T has plenty to offer.