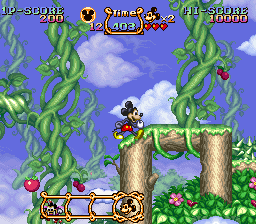 With the close of the 8-bit era all eyes turned to Capcom to see what they would do with their Disney license.  Sunsoft had already moved on and acquired the Looney Tunes license and begun to release games of varying quality.  The majority of Capcom’s 8-bit releases ranged from excellent to classic.  So it was a bit of a surprise when their first product was an original release starring Mickey Mouse.

Mickey, Donald, Goofy, and Pluto are horsing around when Pluto disappears into a strange land.  Mickey follows him into this strange world and is informed that it is ruled by the magician Emperor Pete.  After refusing to leave a local wizard decides to help him in his quest.

As an original game not based on a prior cartoon series Capcom were free to set the rules as they saw fit.  Magical Quest was an excellent first start for the Disney properties on 16-bit, with excellent gameplay to match its vibrant graphics.  The Magical Quest series was both critically and commercially successful and would eventually spawn 2 additional sequels and ports to the Gameboy Advance.

As regular Mickey Mouse you are a bit limited.  You can perform the platform staple butt bounce on enemies and grab objects.  These range from simple blocks that can be used as projectiles to fruit that might sprout a propeller to carry you upwards.  The coins collected can be used in the hidden (a little too well hidden if you ask me) shops to buy extra lives, a bigger life bar, etc.  You don’t spend that much time as a plain joe however.

The defining feature of the game is the 3 costumes you receive that bestow different powers on Mickey.  The magician suit, firefighter suit, and mountain climber suits all grant new abilities needed to traverse the levels. As a magician Mickey can fire bolts of magic as well as charge up for a bigger burst.  The firefighter’s hose can put out fires big and small.  As a mountain climber Mickey is armed with a grappling hook that functions exactly like Ladd Spencer’s arm in Bionic Commando.  You can freely switch at any time, even while the game is paused (*hint*) and it is necessary for survival.

The greatest play mechanics in the world are nothing without good level design to exploit them and Magical Quest has it in spades.  At each new level you’ll receive a costume that is tailor made for that specific stage.  There’s an extensive number of fires to put out as a firefighter and sometimes it might not be in your best interest to use your water cannon to destroy everything in sight.  Swinging around the mountains of stage 4 just feels right as you grab ledges or the ceiling to cross gaps.  Aside from the mountain climbing suit the others are governed by a meter that limits their use but the game is fairly generous at replenishing your water/magic.

Each costume’s abilities have secondary functions that will enable you to progress in each stage or make life easier.  Not only can fire hose destroy blocks it can also push them as well as cause ice platforms to grow.  The magic shot can give life to certain inanimate objects and the grappling hook can grab shields from enemies, leaving them vulnerable.  The first 4 levels ease you into the game while the last two are a veritable free for all, forcing you to use every trick at your disposal to survive.  It’s that perfect difficulty curve endemic to most first party Nintendo games that I love implemented impeccably.

Overall the game is perfectly balanced.  Most stages have a few trouble spots that might trip you up but nothing hair pulling.  The boss fights revolve around a specific costume’s abilities and I’m relatively sure you’ll die a few times before figuring them out.   Just because you know what you need to do doesn’t mean you can execute it too.  For those that want a challenge almost every level has an alternate route and many hidden items that you’ll need to think creatively to discover.

Capcom’s artists now had a 16-bit canvas to unleash their talents and the results are spectacular.  While the graphics are fairly vibrant in the early stages they become progressively darker in tone the closer you get to Pete’s castle.  It’s that willingness to go dark that helps the game’s overall presentation in my opinion.  There are barely any Mode 7 effects and the graphics are much stronger for it and even then it’s more than just a gimmick, it’s part of the boss fight.   The animation as well is flawless with a wider range than what we were accustomed to.  Capcom definitely rolled out the red carpet for this release and as gamers we were the winners.

20 years after its initial release Magical Quest is still an enjoyable ride.  The game was re-released on the Gameboy Advance with a few added features such as 2-player coop and a few mini games.  It’s up to you as to how to experience one of the better Disney games from that era.